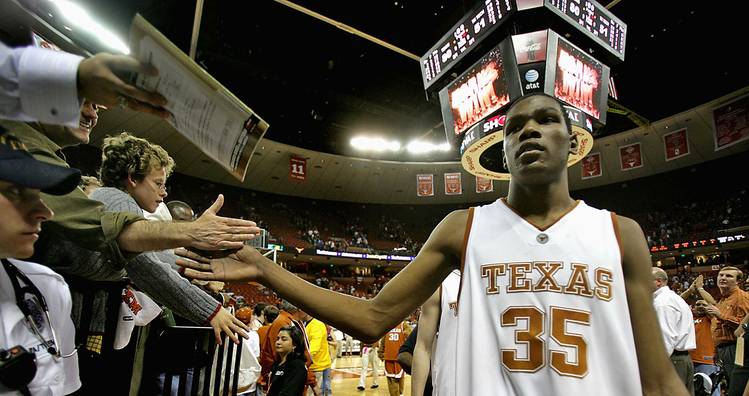 University of Texas Kevin Durant, Big 12 in scoring with an average of 24.7, walks off the court after scoring 17 against Texas Tech on Tuesday, February 20, 2007.

The 40th McDonald’s All-American Game takes place Wednesday night in Chicago, and future NBA stars will be all over the court. There might even be a Longhorn, depending on where top uncommitted player in the country Mohamed Bamba ends up going.

The girls game will feature a pair of future Texas stars, with Tuesday’s 3-point champion Chasity Patterson and 6-foot-1 IMG Academy product Rellah Boothe suiting up for the East squad. And if you’re still not convinced the McDonald’s All-American Game is worth flipping to on a slow sports night, just remember this:

Check out these  highlights of Durant, Budinger, Spencer Hawes and Sherron Collins balling out in a 112-94 West win.

This year’s girls game starts at 4 p.m. Wednesday on ESPN2, and the boys game tips at 6 p.m. on ESPN.