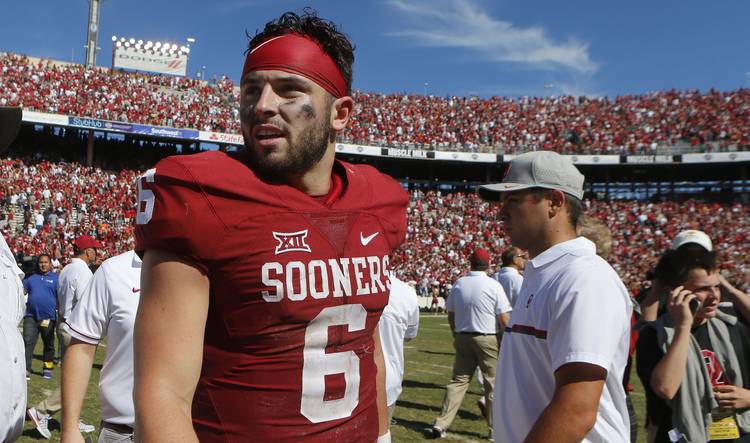 It’s Wednesday, March 31, there are now 17 days remaining until the Texas spring game, and Oklahoma still … finish that sentence however you were taught.

The annual Red River Rivarly between the Longhorns and Sooners will take place on Oct. 14 this year at the Cotton Bowl. While it may be more fun to dream about all the fried food that will be available that weekend at the Texas State Fair, it’s also never too early to start scouting the opponent.

That’s what we’re here to do, by providing some stats and commentary on the 2016 Sooners that might tip us off on what to expect this fall.

We know, it’s tough to swallow. On the eve of Sept. 17, when Oklahoma fell to No. 3-ranked Ohio State to fall to 1-2 on the season, the Longhorns remained unbeaten for a few short hours. California ended that with a flurry of second-half points, but reasonable football minds felt that evening that Texas might be back on a level playing field with its hated rival. Then the Sooners won 10-straight games, finishing with a blowout of Auburn in the Sugar Bowl. Texas… well, you know the rest.

The 2016 Sooners weren’t perfect, not by a long shot. Their biggest flaw was the back end of the defense, which allowed 296.4 passing yards per game — eighth in the Big 12. Texas quarterback Shane Buechele actually had a below average day by that standard, completing 19 of 36 throws for 245 yards and three touchdowns in his team’s 45-40 loss to Oklahoma.

To beat the Sooners, one must find a way to disrupt quarterback Baker Mayfield’s deadly accurate passing. The Lake Travis product led FBS with a 71.0 completion percentage.

Luckily  for opponents, Mayfield’s favorite target will be in the NFL this fall. Dede Westbrook caught 80 passes for 1,524 yards in 2016, which is equal to 31.5 percent of all Mayfield’s completed passes and 38.4 percent of his passing yards. In fact, Oklahoma will need to replace more than 63 percent of its receiving yardage from 2016. But…

Help is on the way. Within the last week, former Kentucky wide receiver Jeff Badet announced his intentions to transfer to Oklahoma after three seasons with the Wildcats. He will graduate in May and be eligible the play immediately. Last season, Badet led the SEC in yards per catch at 21.6. He only caught 31 passes but they went for 670 yards and four touchdowns.

11 years ago, Kevin Durant wowed us in the McDonald’s All-American Game

Texas G Andrew Jones will declare for the NBA draft, will not sign with an agent