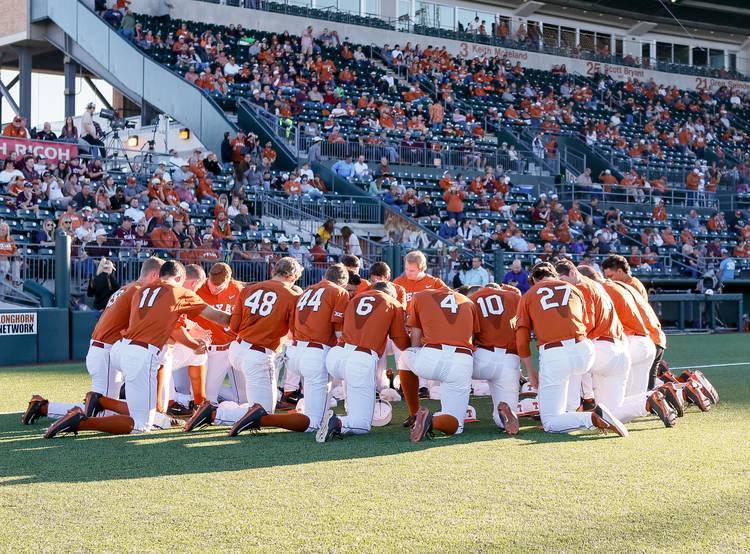 UT player say a prayer prior to a game of the Texas A&M University versus the University of Texas at UFCU Disch-Falk Field in Austin, Texas on March 14, 2017 (Andy Nietupski for AMERICAN STATESMAN)

Five days after Kevin Roliard was hospitalized with an undisclosed injury, Texas has announced that the freshman pitcher is not currently with the team.

Texas cited “personal issues” for Roliard’s departure but did not elaborate on the issues or hospitalization, which occurred on Sunday night. Texas coach David Pierce, though, said in a school-released statement that he had been to the hospital to visit Roliard. Texas athletic director Mike Perrin and Roliard’s parents were also quoted in the press release.

Texas releases a statement about freshman pitcher Kevin Roliard, who was recently hospitalized with an undisclosed injury. pic.twitter.com/QZU4ofTplK

Said Perrin: “We were made aware of the injury involving our baseball student-athlete Kevin Roliard on Sunday night, and it’s a very unfortunate situation. Coach Pierce and I have visited the hospital and talked with his family. Our baseball team was made aware, and they and any other members of our athletics community are being provided with access to counseling and support. Our thoughts are with Kevin, his health and well-being and his family as he recovers. Out of respect for them, we won’t be able to say anything further at this time and hope everyone will honor their wishes of privacy.”

A right-hander from Klein High, Roliard has appeared in five games this season. Over 4.2 innings, Roliard recorded a 0.00 ERA, seven walks and three strikeouts. Roliard last appeared in Texas’ 8-5 loss to Texas Tech on March 19.

Texas attempts to extend winning streak during visit to Kansas