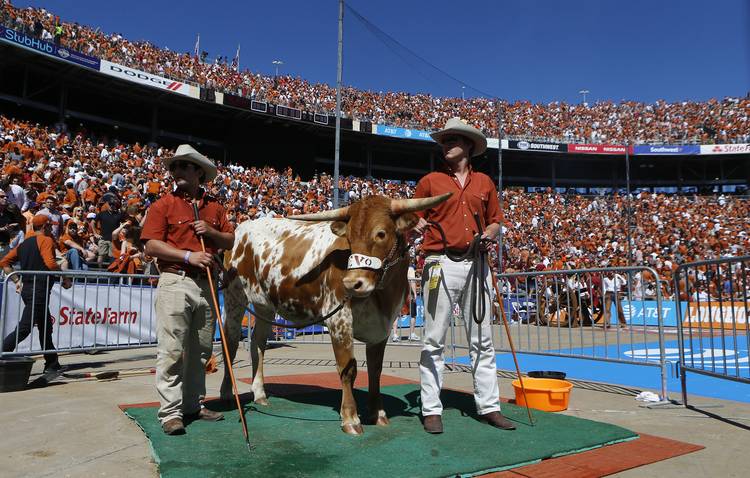 There’s only a few weeks left until Texas football spring game on April 15 and Texas is ready to take the field at Royal-Memorial Stadium.

About Royal-Memorial Stadium: It’s one of just two stadiums Texas plays a football game in every year, guaranteed. The other stadium is the Cotton Bowl, Texas home-away-from-home in the Dallas metroplex. Texas plays Oklahoma there every year, but they’ve also played more bowl games there than any location in program history: 22 times Texas played in the Cotton Bowl.

Here are some things to know about North Royal-Memorial Stadium

It was built at the height of the Depression

Fair Park Stadium opened in 1930, the same year the project broke ground. From 1930-1936 it carried that name until officially becoming Cotton Bowl Stadium. It cost $328,000 to build and held 45,507 people when it opened. The first renovation of the stadium took place in 1948 when SMU’s Doak Walker was running over college football, and the Mustangs were selling out the stadium, since the stadium had carried the “House that Doak Built” moniker.

The Cotton Bowl has gone through four renovations since opening 87 years ago.

The Red River Rivalry moved there in 1932

Texas and Oklahoma have played 111 times, but only not all of those games have been played at the Cotton Bowl. Texas and Oklahoma moved the series there in 1932. Dallas has been the location for most of these starting in 1912, except for 1913 (Houston), 1922 (Norman, Okla.), 1923 (Austin). If you’re reading this blog, you know about the 50-50 split in the crowd, the state fair and the golden hat.

Texas played in 22 Cotton Bowls, but none of those games were as memorable as the 1970 Cotton Bowl. Texas was undefeated and playing frequent Cotton Bowl foe Notre Dame. The Longhorns trailed the Irish 10-7 at halftime and 17-14 in the fourth quarter, but a Billy Dale 1-yard touchdown following a 17-play, 76-yard drive with 1:08 left gave Texas the lead and the win. It was Darrell Royal’s second national championship.

The first title also came at the Cotton Bowl as Texas beat Navy 28-6 in the 1964 Cotton Bowl.

Texas had already claimed the national championship for the 1970 season, but a bowl game still existed. It wasn’t pretty. Facing Notre Dame again, the “national champs” lost 24-11 in the Cotton Bowl. Texas still claims the 1970 title, but they finished third in the AP voting, but first in the UPI.

Thanks to renovations in 2008 that added more than 20,000 seats, the Longhorns and Sooners set a Cotton Bowl record in 2009 with 96,009 fans, the largest crowd in the stadium’s history.

In 2011, the Cotton Bowl started hosting The Heart of Dallas Bowl, because why not?