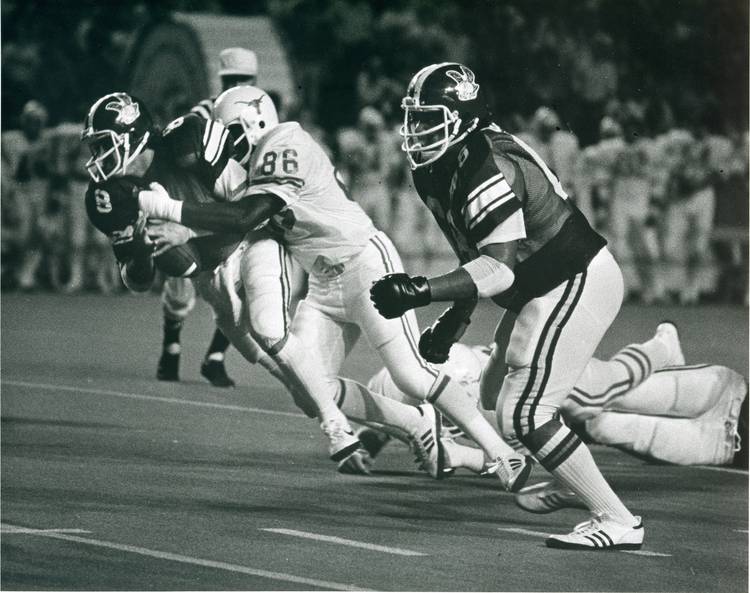 They can show this during the Spring Game, but will they mimic these standout pass-rushers? Here some of the most productive pass rushers in Texas football history.

Most sacks in a game: Shane Dronett

In 1990, the Texas Longhorns went 10-2, the best season under coach David McWilliams. Starting the season unranked, Texas had a nine-game winning streak and reached the Cotton Bowl. One of those wins was a 41-22 victory in Lubbock against Texas Tech, and the star was Shane Dronett. The defensive lineman had five sacks, three quarterback hurries, a blocked a kick, six tackles for a loss of 35 yards and nine tackles over all.

Dronett had 22 sacks for his career at Texas and went on to play in the NFL, being drafted in the second round and 54th overall. He had 44 sacks in his 10-year career.

From 1980-82, Kiki DeAyala established himself as the greatest pass rusher in Texas football history, statistically speaking. His best season came in 1982 when he recorded 22.5 sacks in a season. Sacks weren’t officially counted by the NCAA until 2000, for some reason, so the current record holder for sacks in a season is Terrell Suggs, who had 24 sacks in 2002. But Derrick Thomas recorded 27 sacks in 1988 for Alabama, because Derrick Thomas was great at football.

So if a player gets 22.5 sacks in one season, it gives him a pretty good chance to become the school’s all-time career sack record holder. DeAyala’s 40.5 sacks is the best in school history.

DeAyala, from Houston Memorial High School, was drafted by the Cincinnati Bengals in the sixth round  in 1983, but decided to play for the Houston Gamblers in the in the USFL instead. He played for the Gamblers from 1984-1985 before joining Cincinnati from 1986-1987. He is now a real estate developer in the Houston area

The all-time college football career sack holder is Suggs with 44, but Derrick Thomas and Tedy Bruschi recorded 52 sacks during their careers, which came when the NCAA thought sacks didn’t exist.

WATCH: Is Texas DBU again? As of spring, ‘We’re not there’