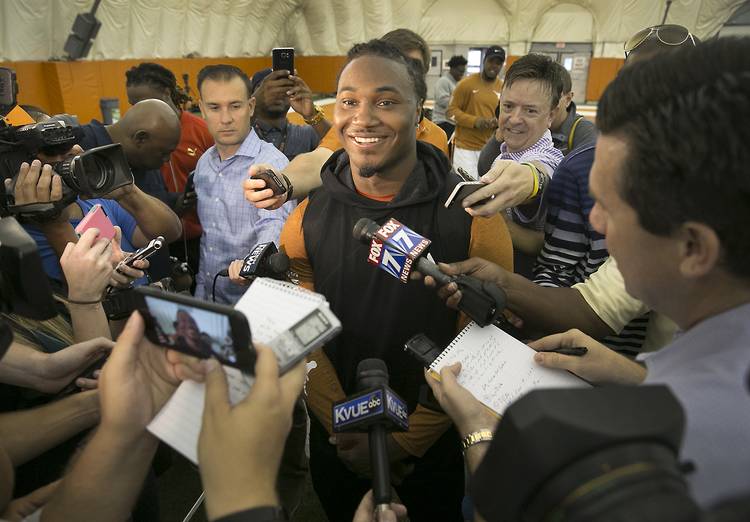 (USE THIS PHOTO SECONDARY) Texas RB D'Onta Foreman performed for NFL scouts Tuesday March 28, 2017 during Pro Timing Day at the University inside the team practice bubble and is all smiles after exceeding expectations particularly with his 40-yard run times of sub 4.5 seconds. RALPH BARRERA/AMERICAN-STATESMAN

D’Onta Foreman believed he made some money with his pro day performance last week, and NFL Draft analysts are starting to agree with the former Texas star.

On Wednesday, ESPN draft gurus Mel Kiper Jr. and Todd McShay put out an updated projection of the first two rounds. For the first time, they included Foreman. Kiper still isn’t sold, but McShay had high praise for the running back as he gave him the final spot in the second round.

If he is right, Foreman would land in Carolina alongside veteran Jonathan Stewart. Here’s McShay explained the inclusion:

A one-year starter, Foreman rushed for more yards per game (184.4) than any other back in the FBS last year. He reportedly ran in the mid 4.4s at his pro day after weighing in at 234 pounds. That’s an excellent size/speed combination. While his pass-catching limitations might cause him to fall, Foreman would be a good Day 2 backup plan for the Panthers if they’re unable to nab Leonard Fournette in Round 1.

A jump in interest was expected after Foreman posted a 4.4-second time in the 40-yard dash on March 28. Unable to perform at the NFL Combine in February due to a stress fracture, Foreman had watched several running backs pass him by on various mock drafts and big boards.

Now it’s the former Texas star who is on the rise with less than a month left until the draft.

WATCH: ‘They need to get tougher’: Tom Herman on UT wide receivers in spring practice

50 in 50: The most productive pass rushers in Texas football history