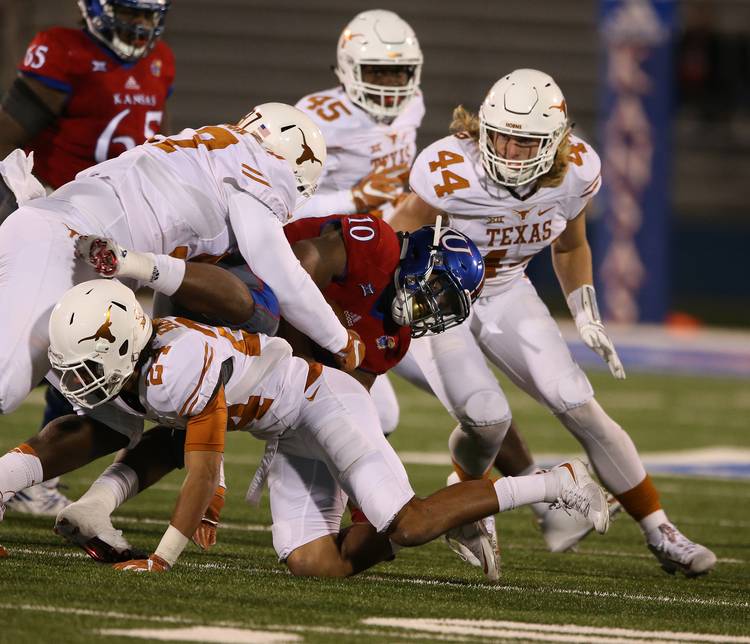 Texas's defense takes down Kansas's #10 Khalil Herbert during the second half in Lawrence, Kansas on Saturday, November 19, 2016. DEBORAH CANNON / AMERICAN-STATESMAN

A few days ago we looked at the defensive stats to hate from last season, and there were a lot. And now we’ll turn that around and look at the areas the Longhorns can build on this spring, as we move closer and closer to the Spring Game on April 15.

Here are the 2016 defensive statistics to love:

The pass rushers are back

Breckyn Hager, Malik Jefferson, Charles Omenihu, Naashon Hughes, Jason Hall, Edwin Freeman and Malcolm Roach all had at least three sacks last season and all are back. Hager had a team-high six, and Jefferson had 5.5.  This is a good starting point for the Longhorns, who hope to put even more pressure on offenses this season.

Overall Texas had 41 sacks last season as a team. That was second in the Big 12 and just two behind TCU.

Texas was tied with Oklahoma for fourth in the Big 12 in opponent first downs, allowing a total of 276 first downs last season.

We’re counting this as a defensive statistic, and it’s Texas’ best one. The Longhorns led the Big 12 in punting with 3,115 yards and a next average of 42.8.

Yeah, Texas wasn’t very good at stopping the run, but neither was the rest of the league. Texas was fifth in the Big 12 in rush defense, allowing 189 yards per game.

On Second Thought Ep 51: Suzanne Halliburton on A&M, Baylor and Kirk on The Masters