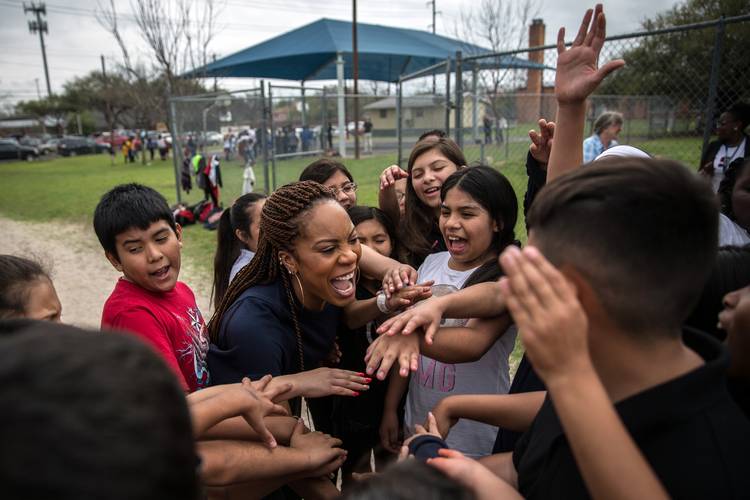 Sanya Richards-Ross, an Olympic track and field athlete and a member of Athletes for Hope, a non-profit focused on philanthropy through sports, huddles with students from Brooke Elementary School after leading them through a relay race as part of Let's Move! Active Schools, a national initiative promoting physical activity and physical education in K-12 schools across the country. (Tamir Kalifa/ AMERICAN-STATESMAN)

Richards-Ross is due in August with their first child — a son. She spoke with Austin American-Statesman reporter Nicole Villalpando about the joys and challenges upcoming for their family.

RELATED: The Longhorns’ first couple of athletics is expanding the family

Parenthood and retirement from sports is changing where they are in their life and what goals they have for the future. This weekend, the Rosses are partnering with Capital One Bank to be spokespeople for Capital One’s Banking Reimagined Tour. A 54-foot trailer will be at The Domain from 10 a.m. to 6 p.m. Saturday and Sunday.

The Rosses, who now live in Round Rock, will be there Saturday afternoon to set their own financial future. “It meets you where you are,” she says. “It takes away the anxiety. It puts your life goals first and then helps you to figure out how to get there financially.”

To read the full story on austin360.com, including more information on the Capital One Reimagined Tour and when the Rosses will be there, click here.

Diamond Dust: Can Texas softball shake off its awful history against ranked teams?