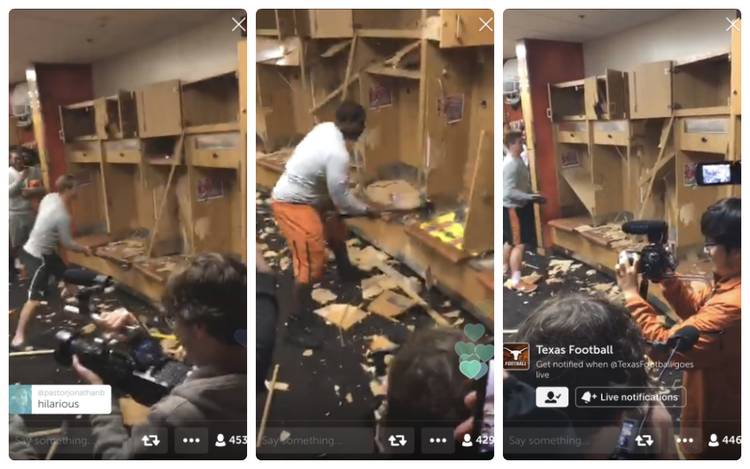 Decked out in a hard hat and construction vest, Texas coach Tom Herman kicked off the official renovation of the UT football facilities on Friday morning by taking a sledgehammer to the locker room.

Literally. All on social media.

“Hey, listen up,” Herman told players before the commotion began. “You guys know why we’re here. We’re here because we’re demoing this locker room, and we’re committed to giving you guys the best facilities in America and that starts right now.

“So I’m going to take a swing, and seniors, you get a little ceremonial swing, too.”

Herman’s first swing into the old wooden lockers, once considered far ahead of everyone else during the 1990s, nearly knocked him back into the crowd. But Herman steadied himself and slammed a few holes in the wood, which sent fragments flying everywhere.

Then, other UT players stepped up and started banging away, as other players cheered with every thwack.

Texas is expected to announce more detailed plans about what type of renovations are coming. But it’s known that Herman wants to redesign the locker room from top to bottom, essentially bringing it into the 21st century.

While the Moncrief-Neuhaus Athletic Center is still one of the upper-echelon facilities in college athletics, it has fallen behind UT’s peers. Former coach Charlie Strong believed the facilities were fine and didn’t make upgrades much of a priority.

However, Herman walked the facility practically after being hired and convinced UT President Gregory L. Fenves and men’s athletic director Mike Perrin of changes that needed to be made.

Where are the former Longhorns playing in the minors?