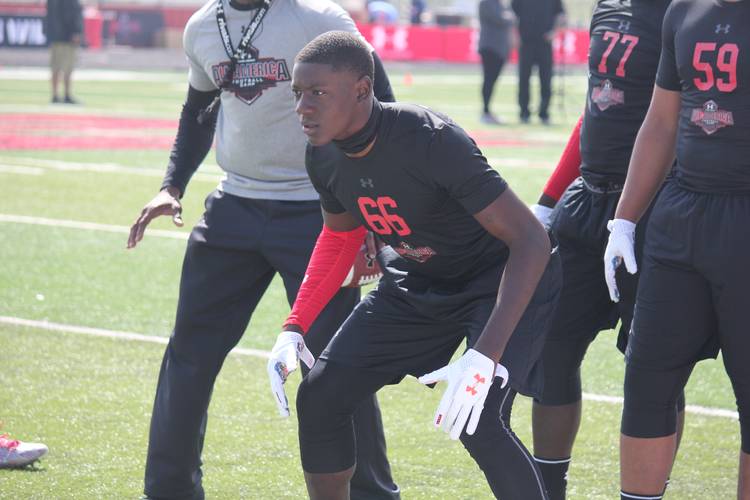 Fort Worth Eastern Hills linebacker Byron Hobbs is one of just two DFW prospects to sign with Texas in 2018. (Mike Craven)

Texas’ 2018 recruiting class grew to two members Friday night when Fort Worth Eastern Hills linebacker, Byron Hobbs, announced his pledge on Twitter. The 6-3.5, 204-pound prospect joins Florida athlete Justin Watkins in Tom Herman’s first full class as head coach of the Texas Longhorns. Hobbs is a three-star prospect ranked as the No. 25 outside linebacker in the country, per 247Sports Composite.

Hobbs is one of two in-state linebackers with Texas offers. The Longhorns are also in pursuit of Rockwall middle linebacker Alston Orji. The Longhorns are expected to sign at least two linebackers in the 2018 class. Hobbs visited Texas on March 25 to watch a practice and visit with the coaching staff. He made it clear the next day at Under Armour All-American Camp Series that the Longhorns were high on his list and that the visit made a lasting impression. Two weeks later and Hobbs is an unofficial Longhorn.

“The Texas visit was a big deal for me. I definitely enjoy Texas,” said Hobbs on March 26 in Cedar Hill. “Getting out there with coach Herman and coach Orlando watching the defense dog the offense. They want me to be part of the family and help rebuild Texas.”

New University of Texas basketball arena: What people are saying