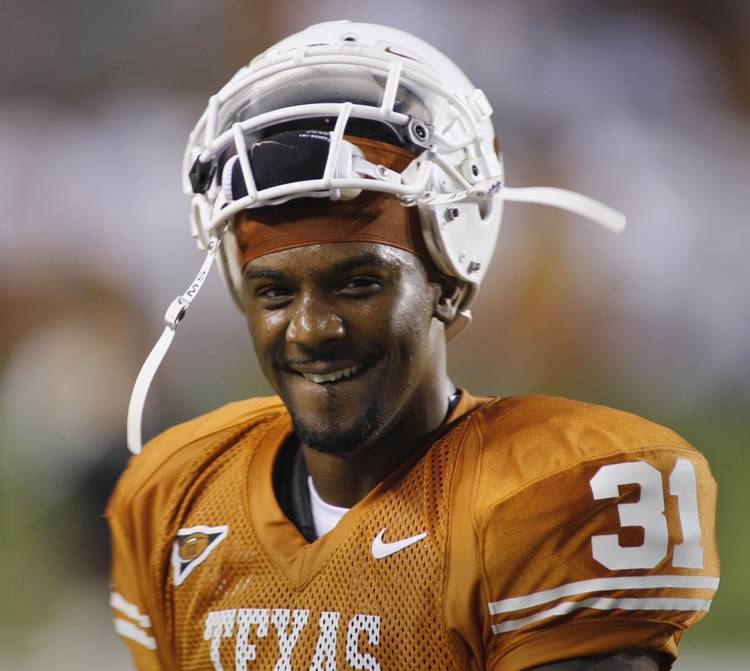 Texas cornerback Aaron Ross pauses during the pregame warm-up before his team's 36-10 college football victory over Oklahoma State in this Nov. 4, 2006 file photo in Austin.

Aaron Ross knows a thing or two about beating Oklahoma, so who better to throw out the first pitch for a weekend series between the Red River rivals?

The former Longhorns star will take the mound Friday night before a 7 p.m. game between Texas and Oklahoma at UFCU-Disch-Falk Field, the Longhorns baseball team announced via Twitter.

RELATED: Pitching to be showcased as Texas greets its ranked Red River rival

Just the sight of him should be enough to put every Sooner in the building on edge.

Ross, of course, played cornerback for Texas from 2003 until 2006, and was on the field for a pair of victories over the Sooners his final two seasons. The second of those might have been his most memorable performance in burnt orange, including a pair of interceptions and this brutal fourth-quarter hit on Manuel Johnson.

Ross has a busy weekend ahead of him. You can also catch him alongside wife Sanya Richards-Ross on Saturday at The Domain for Capital One’s Banking Reimagined Tour. The Longhorns’ first couple of athletics is expecting their first child in August.

Chris Simms: ‘I had to tell my dad first’ about CBS demotion