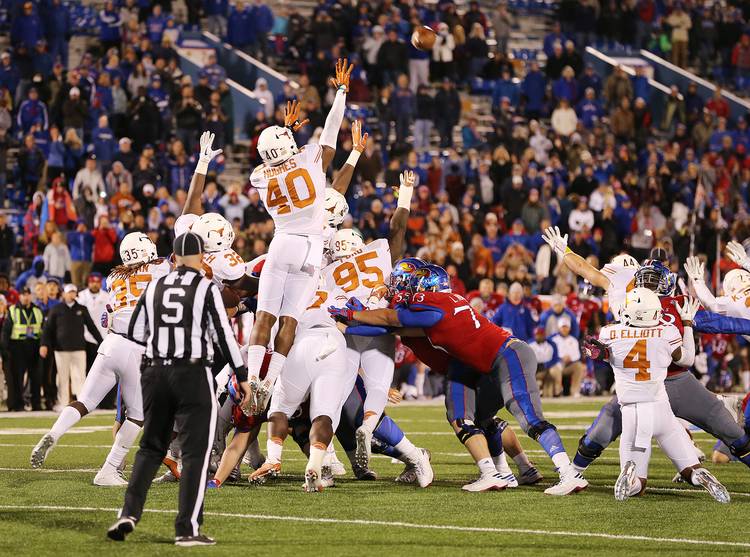 Texas is unable to stop a field goal by Kansas to win the game in overtime in Lawrence, Kansas on Saturday, November 19, 2016. Kansas beat Texas 24-21in overtime. DEBORAH CANNON / AMERICAN-STATESMAN

The Texas Spring Game is fast approaching, and we’re busting out facts every day.

We’re delivering five stats for every team Texas will play next season, and we continue with the Texas bullies, those Kansas Jayhawks.

That’s the margin of victory Kansas won by last season. It pretty much ensured the end of the Charlie Strong era at Texas, was one of the more embarrassing losses Texas has suffered in quite a while (Kansas was 1-9 at the time). You can read all about it here.

Kansas was 10th in total offense in the Big 12. Despite being named “The Big 12” there are only 10 teams in the Big 12. Confusing, we know. But what is not confusing is when Kansas averages 200 fewer yards than the first-place team, Texas Tech, it’s not a good thing. Kansas gained just 4,314 yards last season. Texas running back D’Onta Foreman had nearly 700 more rushing yards than Kansas. The Jayhawks scored just 27 touchdowns last season.

Kansas had the best pass defense in the Big 12. Yup. Kansas allowed just 219.9 passing yards a game. They gave up 26 touchdowns last season in the air, but allowed just 2,637 passing yards. Now, this is a bit misleading because Kansas was so bad in other areas, trailed by so much in most games, that teams didn’t throw on the Jayhawks. Kansas defended just 357 passes last season. That’s the fewest by any team in the Big 12.

As in 35.6 percent of the time, Kansas prevented offenses from converting  on first down, tops in the Big 12.

Matthew Wyman, a senior last season, was 26-for-26 on PATs last season. That’s tied with West Virginia junior kicker Mike Molina who was 51-for-51. Who was last on this list? Any Texas fans out there? Anyone? Yeah, it was Trent Domingue, who was 40-for-44.