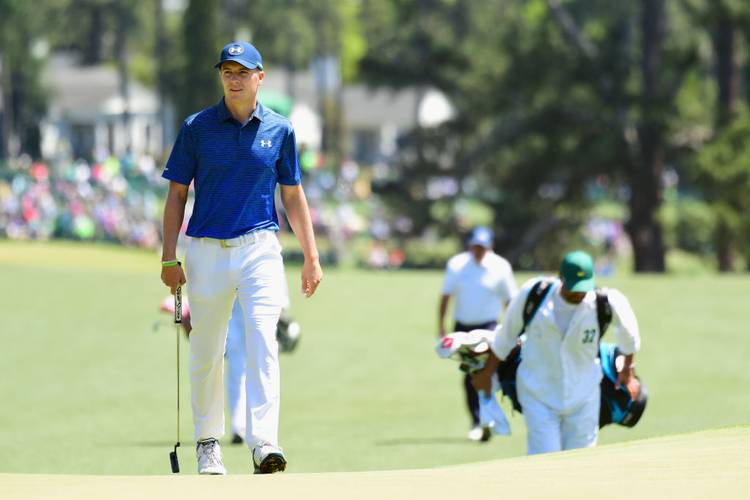 AUGUSTA, GA - APRIL 08: Jordan Spieth of the United States walks onto the first green during the third round of the 2017 Masters Tournament at Augusta National Golf Club on April 8, 2017 in Augusta, Georgia. (Photo by Harry How/Getty Images)

Saturday is known as moving day at The Masters, and Jordan Spieth checked all the boxes during his front nine.

The Texas product, who is looking to win his second green jacket, made the turn at 3-under par after firing a 33. Birdies at holes No. 6, 8 and 9 propelled him into a tie for fourth place.

After five-straight pars to open his round, the fireworks began at No. 6. An average approach into the 191-yard par 3 left Spieth well below the hole, but it didn’t matter as he drilled a 40-plus foot putt to move to 1-under.

Here’s another look at it.

Watch @JordanSpieth make a 44-foot putt for birdie on No. 6 to get to 1-under par. #themasters pic.twitter.com/Yh8e68xwne

Austin American-Statesman columnist Kirk Bohls followed Spieth for the first eight holes, and tweeted that the Dallas native exchanged fist bumps and high-fives with fans after his tee shot at No.6, before he drilled the long putt.

Followed Jordan Spieth first 8 holes. He is dialed in. Nailing his drives. Great tee to green. Super steady. He's 2-under after 8. #masters

After his tee shot on No. 6, which he would birdie, Spieth exchanged high fives and fist bumps on the way down the hill. He's loose.

The juices were just getting flowing for Spieth. After making par at No. 7, he made a run at eagle on the par 5 eighth with an expert second shot that traversed a slope to the right of the green and came to rest about 10 feet from the pin. That led to a tap-in birdie.

Then at No. 9, Spieth kept the birdie train rolling by dropping his approach to kick-in range.

After taking a nine at hole No. 15 on Thursday, he made the turn Saturday having played 7-under in the holes since. He is trying to become the first player ever to win The Masters having taken a quadruple bogey on a hole.

Spieth shot a 3-under round of 69 on Friday that featured three birdies in the final six holes. If he can keep the form he showed in the front nine on Saturday, that green jacket might just be within reach.