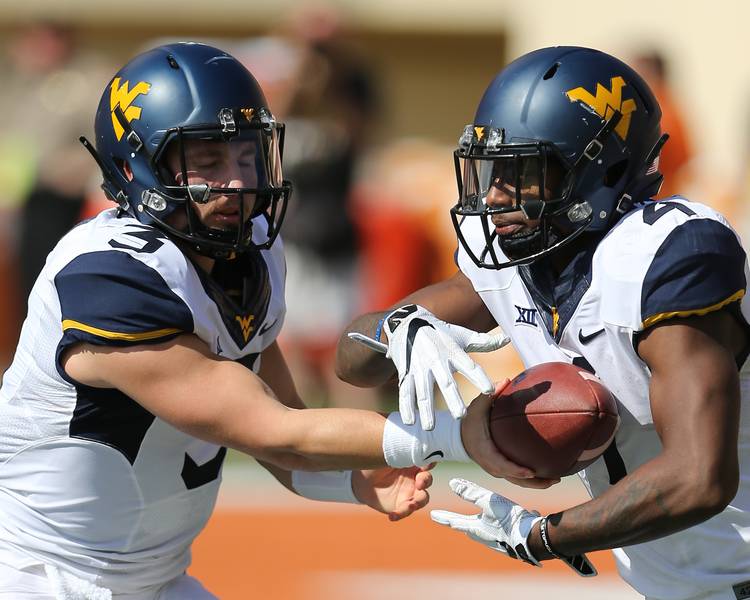 West Virginia quarterback hands off to running back Kennedy McKoy in their game against Texas at Darrell K Royal - Texas Memorial Stadium on Saturday, November 12, 2016. Jamie Harms / for American-Statesman

The Texas football spring game is so close we can almost taste the funnel cake.

As our 50 facts for 50 days series nears its end, we give you a few numbers to mine through about the penultimate opponent on the Longhorns’ 2017 schedule: West Virginia.

With last year’s 24-20 win over the Longhorns at Royal-Memorial Stadium, the Mountaineers remained one of two current Big 12 teams with a winning record over Texas (Kansas State, 10-7). Since joining the conference in 2012, West Virginia is 3-2 in the series and 2-1 in Austin (the fourth victory came in 1956). This year’s meeting is Nov. 18 in Morgantown, where the Longhorns fell 38-20 in their last trip in 2013.

The ESPN Football Power Index projects the Mountaineers to win 5.9 games in 2017. While we’re not exactly sure what that means considering victories aren’t handed out in one-10th portions, it’s an interesting number to dissect. West Virginia brings back plenty of pieces from a team that finished 10-3 in 2016, and has one of the most intriguing additions in college football with former Florida quarterback Will Grier.

Grier should be eligible right away after serving his one-year suspension for taking a banned substance, although an official announcement is still pending. Sophomore Chris Chugonov has been taking reps in spring practice just in case, but odds are Grier will start as soon as he is eligible. Remember, this is the guy who led Florida to a 6-0 start in 2015 before he was suspended, and then watched the Gators offense flounder as soon as he left. He was the No. 2-rated pro-style quarterback coming out of high school in 2014.

Remember when Oklahoma throttled West Virginia in the snow? It’s a game Mountaineers fans would like to forget, and one casual college football fans probably forget had real Big 12 championship implications. Why bring this up? Because lost in the 56-28 score was an absolutely massive performance by West Virginia running back Justin Crawford, who ran for 331 yards on 24 attempts. Not bad for a guy who spent nights working at Taco Bell just a year prior.

The league’s offensive newcomer of the year will be back, and if Grier plays like expected the pair will make up a fearsome backfield.

For the second year in a row, the ‘Eers ranked second in the Big 12 in defensive scoring average. West Virginia gave up 24.0 points per game in 2016, which is particularly impressive considering the top six scoring teams in the league each averaged at least 31.9 points. The Mountaineers only allowed more than 21 twice in league play.

Need an NBA team to root for in the playoffs, Longhorn fans? Here’s some help