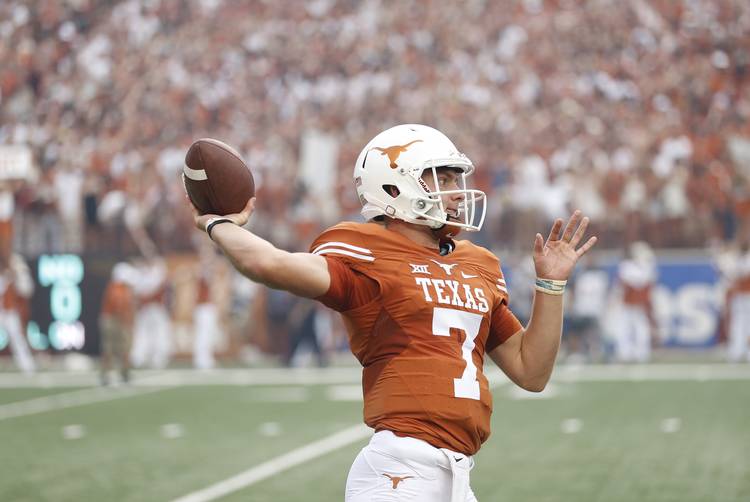 The Texas spring football game is only a week away. Are you ready?

In case you’re still feeling the effects of March Madness, or have gone cross-eyed looking over fantasy baseball statistics, we’ve got some numbers that should get you excited about football again.

As part of our 50 facts for 50 days series, here are some Texas offensive stats to love from last season.

The best stat also comes with a huge asterisk, as the Longhorns will need to replace much of their rushing yardage from last season. Of 2,871 yards, D’Onta Foreman accounted for 2,028 of them.

Don’t get too stressed, though. This could actually be a good thing. No, hear me out. Remember how fun it was watching Foreman blossom into a star last season? We already know Chris Warren III is capable of great things, now it’s his turn to take over one of the most coveted positions in college football. Plus, he’ll have an even better version of All-American left tackle Connor Williams to run behind.

The Longhorns really were the complete package offensively in 2016. Their average of 491.3 yards per game ranked 16th across all of FBS, and the combination of the Doak Walker Award winner and a freshman quarterback with a lethal deep ball brought fans out of their seats on numerous occasions.

All of the losses were frustrating, and it would have been nice to see a true clutch drive or two from Shane Buechele, but as far as exciting offensive plays few fanbases had it better. The best part is that, outside of Foreman, important pieces return all over the field. The spring game will be a first chance to see them in Tom Herman and Tim Beck’s new system.

At 31.9 points per game, Texas ranked 46th nationally in scoring output. That may not sound like a ton, but consider this: the Longhorns scored at least 40 points five times, and only three of those resulted in wins. The main objective of any offense is to score points, and by that measure Texas succeeded in 2016. It just didn’t get enough defensive help.

The college football world immediately fell in love with the baby-faced assassin when he showed off his deep ball in the season opener against Notre Dame, and a few weeks later he performed again on a big stage with touchdowns of 63 (Devin Duvernay) and 45 yards (Dorian Leonard). Heck, even before the season started, Buechele showed he has a flair for the dramatic when he posted a video of himself throwing deep to a guy on a jet ski.

Another offseason to work with essentially the same receiving corps can mean good things for the Longhorns’ passing game. And while you may want to see more slants over the middle to keep the defense honest, the truth is everyone could use more Buechele deep balls in their life — especially speedy targets like Devin Duvernay, Armanti Foreman and John Burt.

OK, so the 6-foot-6, 288-pound All-American left tackle isn’t technically a stat, but he made a lot of the aforementioned numbers possible. Consider these numbers compiled by analytics website Pro Football Focus, which tracks every offensive line play in college football:

Texas coaches react to the passing of Spike Dykes

Making the grade: Texas honors its athletes for their academic achievements