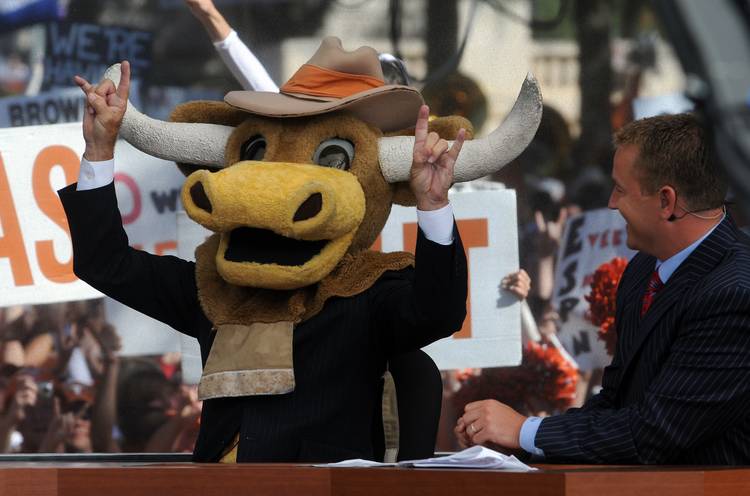 ESPN's Lee Corso dons a giant Bevo head after picking the Longhorns to win over Missouri in their football match up tonight in Austin as Kirk Herbstreit looks on. ESPN "College GameDay" was broadcast from the University of Texas in front of the UT Tower. Patrick Meredith for AUSTIN AMERICAN STATESMAN 10/18/08

ESPN College Game Day analyst and former football coach Lee Corso fears the Big 12 Conference’s future is in peril unless it does “something.”

In an interview with Culture Map, Corso touches on several different topics, from the start of the mascot head picks on Saturday’s show, to the University of Houston’s new coach and future and, of course, the Big 12.

Corso believes bigger could be possibly not better.

I think the one place that’s got to be careful is the Big 12 Conference. If the Big 12 doesn’t do something, I wouldn’t be surprised if Texas and Oklahoma leave 4-5 years from now and go someplace else just like Texas A&M did.”

Will Texas and Oklahoma leave the Big 12? Anything is possible in the future, but for the time being, Texas looks committed to the Big 12 at least until 2024-25, as Texas beat writer Brian Davis explained.

Big 12 commissioner Bob Bowlsby and the rest of the power brokers in the Big 12 seemed to put expansion talks to rest last fall, with Bowlsby saying “bigger is not always better.”

To read more about possible expansion, here is Hookem.com’s award-winning series on possible new Big 12 teams from the summer of 2016.