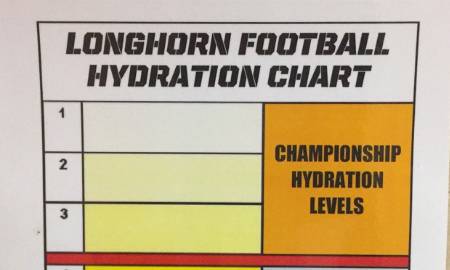 Went to take a leak in Moncrief and this was hanging above the toilet. Tom Herman's attention to detail is real 😳 pic.twitter.com/FoAMbkf56K

That's such a relief. https://t.co/gbWGxi7GAU

Just wondering if there are fiber-intake charts above the commodes. https://t.co/HinX0OTObD

Either urine, or you're out, obviously.

Next time you piss, Tom Herman wants you to remember:

Wife: You're selfish.
Me: Check my urine. https://t.co/bfTR6PGwdQ

I personally view and even sometimes taste the pee to make sure levels of hydration are championship caliber. https://t.co/SnVQNrnJKC

Texas football coach Tom Herman said they consistently check the urine of players. Calls out players who are dehydrated in front of the team