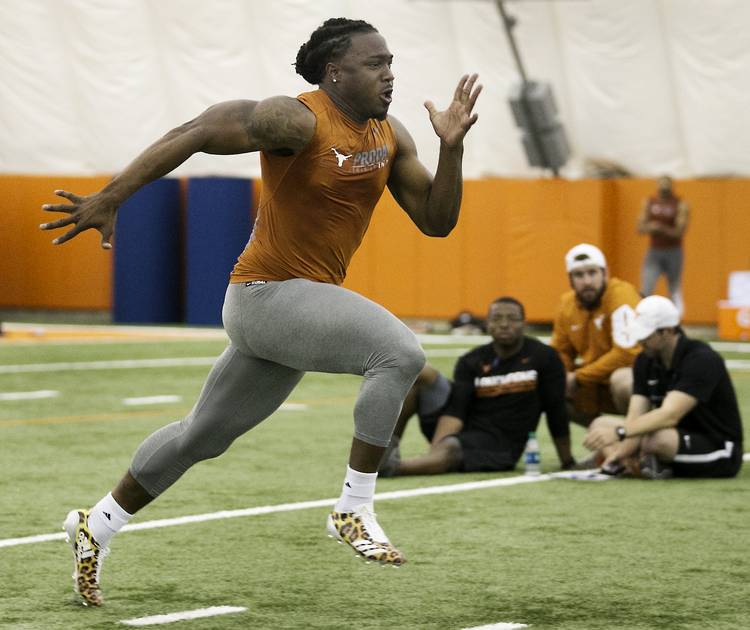 Texas RB D'Onta Foreman performed for NFL scouts Tuesday March 28, 2017 during Pro Timing Day at the University inside the team practice bubble as he runs the 40-yard dash in under 4.5 seconds bettering expectations. RALPH BARRERA/AMERICAN-STATESMAN

Heading into the second day of the NFL Draft, opinions are still pretty split on where the 2016 Doak Walker Award winner will be taken. So far through Round 1, only two running backs are off the board. Rounds 2 and 3 take place Friday night, with 75 selections to be made in all.

By the end of the night, 107 players will have realized their draft-day dream. Will Foreman be one of them?

It’s a complicated question, as it’s sure to come down to a number of different factors. Here are a few of the big ones to understand if you’re watching the draft as a Texas fan first.

The Green Bay Packers hold the first pick of the second round, and they also happen to be one of the teams in need of a running back. Dalvin Cook is the consensus best running back left on the board, and it seems like a logical fit. Almost as logical as it seemed that Cook would be taken in the first round, but that didn’t happen.

In all likelihood he’ll be the first running back taken after first-rounders Leonard Fournette (No. 4 to Jacksonville) and Christian McCaffrey (No. 8 to Carolina), but whether or not it’s the Packers who take him could affect Foreman. On the one hand, selecting Cook would get another running back off the board, but on the other it would all but eliminate the Packers — who have another second-round pick — as a candidate to select Foreman.

Teams don’t always select the player they need, but it’s still a good place to start. According to ESPN, the teams in need of a running back (who haven’t already taken one) in this draft are: Cincinnati, Detroit, Green Bay, Indianapolis, Kansas City, Minnesota, New England, New Orleans, New York Giants, Oakland, Philadelphia, San Francisco, Tampa Bay and Washington.

That’s a long list. In fact, at 14 teams, it’s almost half the league. Don’t expect all of them to be hunting for running backs on Friday, but at least a few of them will be.

So, who’s picking where?

OK, so: 14 teams that “need” running backs, which hold a total of 31 picks in the second and third rounds.

Prospect rankings from CBS Sports and ESPN have Foreman as the sixth-best running back remaining, behind Cook, Tennessee’s Alvin Kamara, Oklahoma’s Joe Mixon and Semaje Perine, and Toledo’s Kareem Hunt.

(Yeah, that seems a little low to us, too. We are talking about the D’Onta Foreman who led the FBS in yards per game last season, right?)

What do the mocks say?

It looks pretty good. Sports Illustrated, CBS Sports and NFL.com all put out mock drafts of the second day on Friday, and two of them had Foreman getting selected. SI’s mock had Green Bay passing on Cook, then taking Foreman with its other second round pick at No. 61. The former Longhorn makes sense as a replacement for Eddie Lacy, especially if the Packers don’t want to take a chance on Cook’s reported off-the-field issues.

Meanwhile, NFL.com’s Lance Zierlein has Foreman staying in state with Houston, a team that doesn’t necessarily need a running back. That would be an interesting pick at No. 57, but one many Longhorns fans could get behind. It is worth noting that the CBS mock draft only goes through the second round.

All of that said, the NFL Draft is a difficult thing to predict. Some first-round decisions (looking at you, Patrick Mahomes II) on Thursday blew people’s minds. It wouldn’t be shocking to see Foreman last until Saturday, but if you absolutely can’t miss seeing Foreman’s big moment you’d better at least set the DVR.