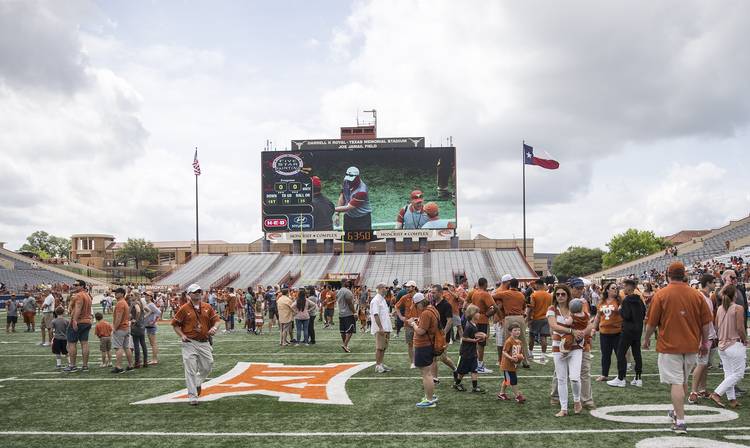 Texas Longhorns fans check out the field before the Orange and white spring football game at the Darrell K Royalâ€“Texas Memorial Stadium on Saturday, April 15, 2017 RICARDO B. BRAZZIELL/AMERICAN-STATESMAN

An already light roster at tight end got a little lighter Friday, when Texas freshman Peyton Aucoin announced he had been granted his release to transfer.

Aucoin, a 6-foot-5, 250-pound product of Brother Martin High School in Metairie, Louisiana, sat out the 2016 season on a redshirt.

RELATED: Peyton Aucoin is no chicken when it comes to blocking

With the departure of Aucoin, the Longhorns have only three scholarship tight ends (Andrew Beck, Garrett Gray, Kendall Moore) remaining on the roster. Lake Travis product Cade Brewer is set to arrive in the fall.

Aucoin was recruited mainly as a blocker, having caught only two passes during his high school career. Even so, he was the No. 48-ranked tight end in the Class of 2016 in the 247Sports composite.

Tom Herman’s offense requires tight ends who can catch passes, though, and that clearly left Aucoin as the odd man out. In his tweet, Aucoin said he is eligible to transfer to all schools outside the Big 12 who are not on the Longhorns’ schedule the next two seasons.

Is tonight the night? Scouting D’Onta Foreman’s chances of being selected in the NFL Draft on Friday