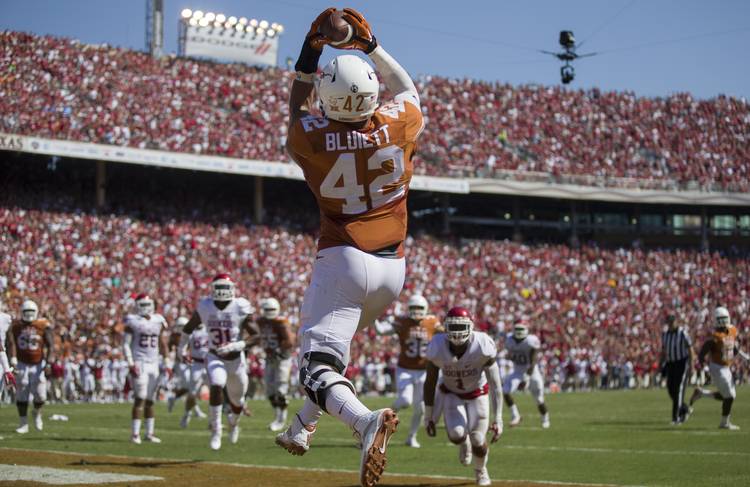 A third-round pick for the Houston Texans, running back D’Onta Foreman was the only Texas Longhorn taken in the 2017 NFL Draft.

A few of his former teammate are still eyeing NFL careers, though.

Dear, @RAIDERS nation it's time to bring back a championship to this great organization! Ready to get to work. 🙏🏾 #RaiderNation

From 2012-15, Boyette appeared in 42 games at Texas. Thirty-four of his 100 career tackles were logged this past season, and the defensive tackle also registered 5.5 sacks in his career. At last month’s pro day, the 6-3 Boyette told reporters he was checking in at “a sexy 310” pounds. Boyette is married to Imani Boyette, the former UT basketball player who now plays for the WNBA’s Chicago Sky.

Texas lineman Kent Perkins is headed to the Bengals as a free agent.

Perkins made 34 starts on the right side of Texas’ offensive line, and 22 of those starts were logged at right guard. Placed on the second team of the Big 12’s honor roll this past season, Perkins started 10 times for a Texas offense that featured a 2,000-yard rusher (Foreman) and a quarterback who nearly threw for 3,000 yards (Shane Buechele). The 6-4, 320-pound Perkins performed admirably at Texas’ pro day in March.

I guess it's cool to announce it now. But first off I'd like to thank my Lord and savior, Jesus Christ, for blessing me throughout my life with a supportive family and an awesome Longhorn fan base for supporting me while at UT! I love you all! I would also like to thank the Jacksonville Jaguars for blessing me with the opportunity to continue my career. It's a process, but it's one that I'm more than happy to journey on. God is GREAT! God is GOOD! #HookEmForever #GoJags 🙏🏽🙌🏽✊🏽

Bluiett was used as both a tight end and defensive end during his time at Texas. Playing in an offense that valued tight ends as blockers, he had 10 receptions, 178 yards and two touchdowns. On defense, he recorded 45 tackles and 4.5 sacks. The 6-3, 257-pound Bluiett appeared in 44 games for the Longhorns.

I've been passed over my whole life. This changes nothing. Thank you @nyjets and @HoustonTexans for the opportunities

Ex-Texas safety Dylan Haines, the former walk-on who ended his career in fifth place on the Longhorns’ all-time interceptions chart, also announced that he will try-out with Houston and the New York Jets.