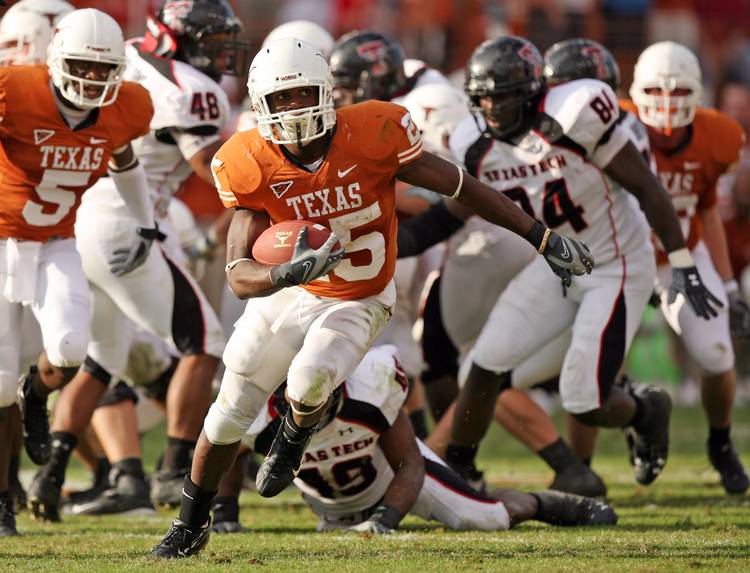 UT running back Jamaal Charles runs for a touchdown in the second quarter against Texas Tech at Royal-Memorial Stadium on Saturday Nov. 10, 2007. Jay Janner/ American-Statesman

Jamaal Charles inked a free-agent deal with the Denver Broncos on Tuesday, adding an interesting twist to his NFL career. The former Texas running back spent the previous nine seasons with the Broncos’ AFC West rivals, the Kansas City Chiefs.

The Broncos announced the signing in a press release Tuesday, and according to ESPN’s Adam Schefter the one-year deal is worth $3.75 million.

Proud to join Bronco Country! I'm blessed to be a part of something special! #GiveGodTheGlory pic.twitter.com/hdYkVKaiZx

Excited to have Jamaal Charles join the Broncos. A great addition to our backfield, and we're thrilled we won't have to play against him!

Charles became one of the best running backs in the NFL during his time with Kansas City, rushing for at least 1,000 yards in five of his first six seasons in the league. His best output came in 2014, when he racked up 1,980 all-purpose yards and 19 touchdowns on the way to his fourth Pro Bowl selection.

His past two seasons have been hampered by injuries. He tore his right ACL in October 2015 and struggled with knee problems on both legs last season. Since the start of the 2015 season, Charles has only played in eight games and carried the ball 83 times.

Even so, seeing him in a Broncos uniform will be jarring for most football fans, especially those in Denver who have grown used to rooting against him. Charles has rushed for at least 100 yards against the Broncos four times, including a 259-yard outburst in 2010.

As Kansas City Star columnist Sam Mellinger put it, Charles signing with Denver has the feel of a heel turn normally reserved for the WWE. The Chiefs released Charles back in February, but his signing with the team’s biggest rival elicited an emotional reaction from the fanbase.

Of course, Charles has unconditional support in Austin, where he rushed for more than 3,000 yards during three seasons with the Longhorns. Former coach Mack Brown tweeted support to Charles. “So proud of @jcharles25,” Brown wrote. “Broncos are very lucky to have him. Good luck my friend. Thanks for all you did for @TexasFootball!”

So proud of @jcharles25. Broncos are very lucky to have him. Good luck my friend. Thanks for all you did for @TexasFootball! https://t.co/qDy9rwII7D