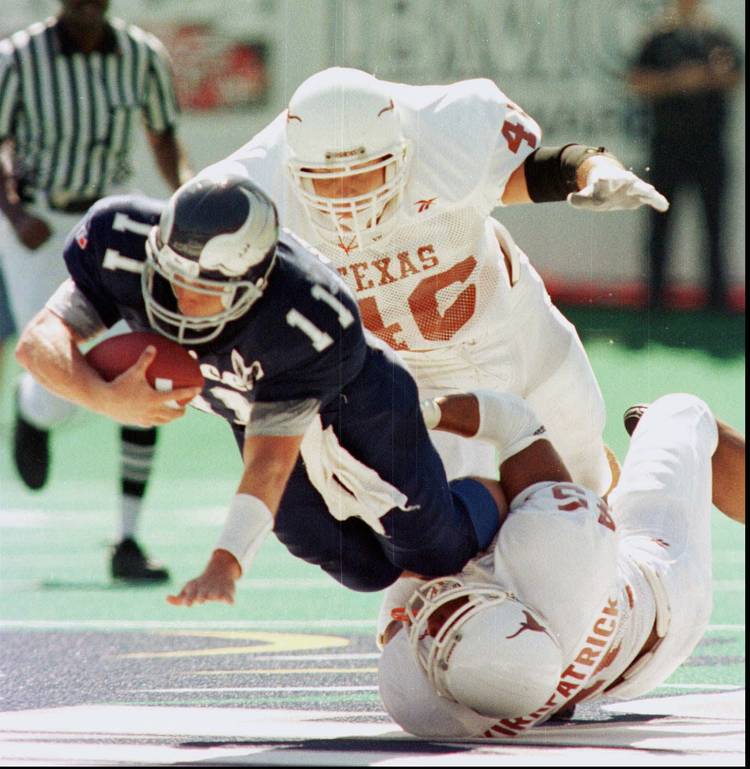 9/27.97 Staff Photo:Sung Park....#11 Chad Nelson QB for Rice is brought down by Dwight Kirkpatrick below with Dusty Renfro coming up from behind in the first quarter of play.

Texas fans remember Dusty Renfro as the hard-nosed linebacker who racked up 370 career tackles for the Longhorns in the late-1990s.

Renfro’s toughness has not waned in the nearly two decades since he last played. Over the past several months, the former linebacker has been recognized for his efforts to keep his father, Terry Renfro, alive with a kidney transplant in 2016. On Monday, Renfro received the Young American Award from the National Football Foundation.

“I moved my family from Lago Vista to Granbury, in with my parents, and I watched every bite that went in his mouth and I worked out with him every single day,” Renfro said, fighting back tears during his acceptance speech. “And we did it.”

Watch the video of the ceremony and the “Longhorn Extra” segment on Renfro’s gift that Longhorn Network did back in December:

Tom Herman: ‘You can flush (my rings) down the toilet’