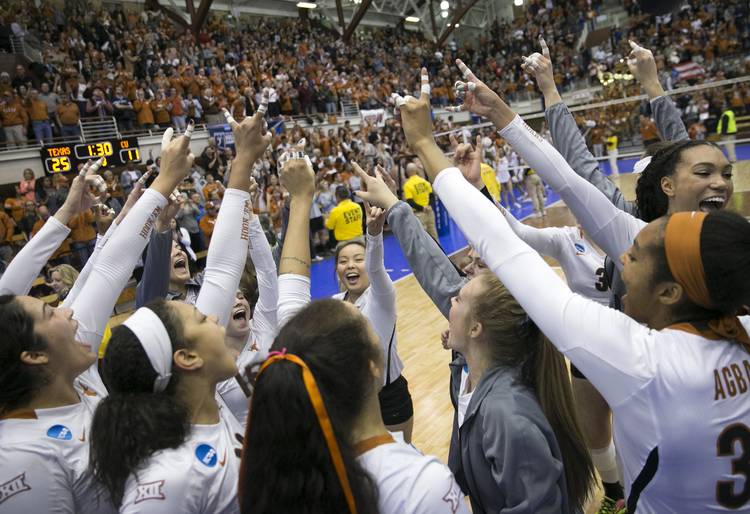 The UT volleyball team celebrates their win over Creighton at the regional round of the 2016 Division I Women's Volleyball Championship at Gregory Gym on Saturday December 10, 2016. JAY JANNER / AMERICAN-STATESMAN

Texas volleyball fans are hoping that the 2017 season ends in Kansas City. It will begin in Florida.

Texas is scheduled to play 26 times during the 2017 regular season, the school announced on Thursday. Texas, which just wrapped up its spring practices, has reached the Final Four in each of the past five seasons, and an experience-laden team is expected to once again contend for a national title. This year’s NCAA championship game will be held in Kansas City.

Texas is set to open its 2017 season at the VERT Challenge, and the Longhorns will play Florida in Gainesville. After playing five times in Florida and San Diego, Texas will meet A&M-Corpus Christi on Sept. 7 in its first match in Gregory Gym.

Other notable dates on Texas’ schedule include a home match on Sept. 8 against Final Four qualifier Minnesota and a Sept. 13 trip to Texas A&M. Texas plays its first Big 12 match at West Virginia on Sept. 23. Kansas, which won the Big 12 title in 2016, hosts the Longhorns on Oct. 11 before visiting Austin on Nov. 15.

Texas’ complete schedule can be found on the school’s website.

One fun fact about the 2017 schedule involves defensive specialist Autumn Rounsaville, who averaged 1.48 digs per set as a freshman. Rounsaville won a state championship during her senior year of high school in 2015, and she will get to play three of her Dripping Springs classmates this fall.

Morgyn Greer, who was a two-time All-Central Texas Player of the Year, is an outside hitter at Florida. Madison Green is a setter on A&M-Corpus Christi’s roster, while Ashley Waggle is a middle blocker at Big 12 rival TCU.