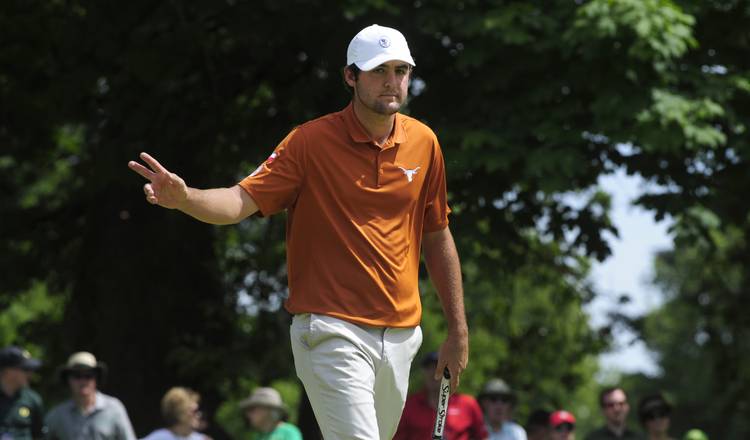 Scottie Scheffler of Texas reacts after sinking a putt during the final round of the 2016 NCAA Division I Men's Golf Championship at Eugene Country Club on June 1, 2016 in Eugene, Oregon. (Photo by Steve Dykes/Getty Images)

After claiming its fifth-straight Big 12 championship, the Texas men’s golf team is staying home for the start of the NCAA postseason. The Longhorns received a No. 3 seed in the Austin Regional when the NCAA tournament field was revealed on Thursday.

Texas will be the No. 3 seed in the Austin Regional at @UTGolfClub #HookEm #TakeDeadAim pic.twitter.com/Pzf7e5nLHI

The tournament takes place May 15-17 at the University of Texas Golf Club. The Longhorns will be seeking their third-straight regional title and 11th consecutive NCAA Championship appearance. In 2016, Texas finished runner-up to Oregon in the NCAA championship match.

The Longhorns have a different look this year without 2016 Fred Haskins Award winner Beau Hossler, but still managed to hold off Oklahoma State by a single stroke at the Big 12 Championships in Kansas. Juniors Doug Ghim and Scottie Scheffler tied for runner-up honors at the tournament.

The Cowboys will be the top seed at Austin, and Wake Forest is the No. 2 seed in the 13-team, 10-individual field. Five teams and five individuals not on the qualifying teams will qualify for the NCAA Championship, which is May 26-31 at Rich Harvest Farms in Sugar Grove, Illinois. Texas last won the national championship in 2012.

While the men stay home, the Longhorn women begin their postseason May 8-10 at the Lubbock Regional. Texas, which won the Big 12 championship, is the No. 5 seed in the 18-team tournament. Six teams and six individuals will qualify from each of the women’s regionals.

The Lubbock Regional is being hosted at The Rawls Course.