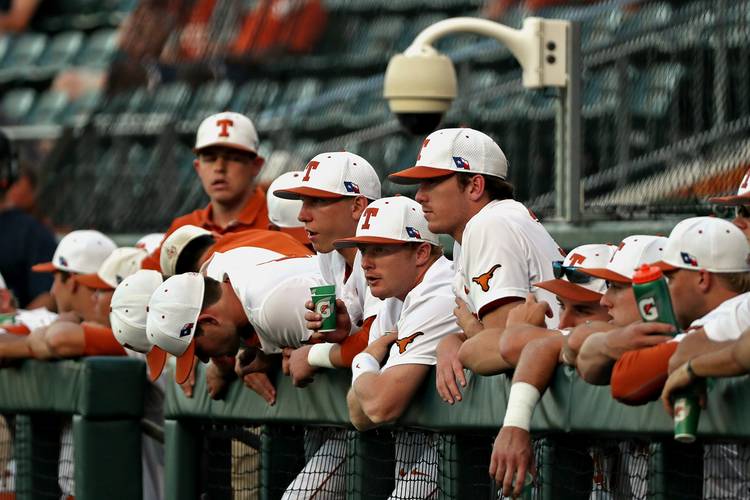 Members of the Texas baseball team watch the game against Kansas State in the dugout at UFCU Disch-Falk Field on Friday March 24, 2017. Daulton Venglar/AMERICAN-STATESMAN

Texas let go of a three-run lead after 6 1/2 innings, falling to No. 9 TCU 4-3 in 10 innings Sunday in Fort Worth to close its series with the Horned Frogs.

Kody Clemons added to Texas’ lead in the sixth inning with his fifth home run of the season. Clemens finished the game going 3 for 4 at the plate.

In the top of the seventh, an TCU error led to a run scored by David Hamilton.

The Horned Frogs (35-11, 15-6) got two runs in the bottom half of the inning off of relief pitcher Chase Shugart, who took over from starter Kyle Johnston, who allowed just two hits and four walks.

Shugart entered the game with two runners on base after a pair of walks from Johnston. The sophomore then walked the first two batters he faced, bringing home TCU’s first run of the game.

After a strikeout, Shugart walked in another run. His day was also dun and Beau Ridgeway got out of the jam with the bases loaded with Texas still leading by one.

The Horned Frogs tied the game in the eighth on a two-out double from Evan Skoug.

Nick Kennedy tossed a scoreless ninth inning for Texas, but Luken Baker hit a walkoff double in the 10th inning to seal the series sweep for TCU.

Texas is off this week and will return to the field on May 16 when the Longhorns host Incarnate Word at Disch-Falk Field. First pitch is scheduled for 6:30 p.m.