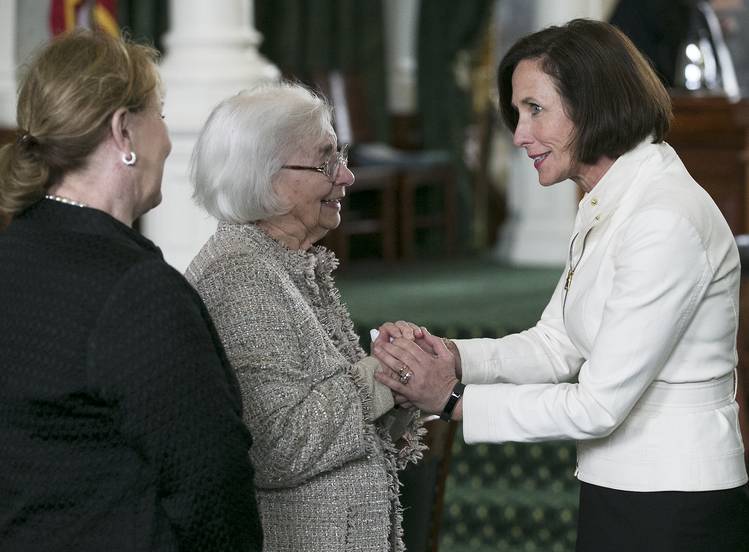 Edith Royal, the wife of former legendary Texas football coach Darrell K. Royal was recognized in the Senate Chambers Thursday afternoon May 11, 2017 for her work with Alzheimers, of which her husband passed away a few years ago. She is greeted by Sen. Lois Kolkhorst. RALPH BARRERA/AMERICAN-STATESMAN

Edith Royal, the wife of legendary Texas coach Darrell Royal, was recognized Thursday in the Texas Senate chamber for her work with the Darrell K Royal Research Fund for Alzheimer’s Disease.

Her husband battled the disease in the final years of his life before passing away on Nov. 7, 2012 at the age of 88. Prior to his passing, in February of that year, Edith Royal announced the creation of the foundation during an emotional appearance at the Texas Senate chamber.

“It is now members of those teams and our football family that return from all over the country almost daily to shower Darrell with love, engage him in activities, play music, sing for him, take him out for a barbecue sandwich or a ride in a new pickup truck, and, as importantly, provide some element of relief for me,” she said then, with Darrell Royal by her side. “It is not just the free time for me, but I know that those moments with his former players and lifelong friends are pure enjoyment for him, even if it is only in that moment.

She said her husband remembered games, players, even plays from many years ago, but “events of the here and now are much more difficult for him to recall. Occasionally, he will come up with one of his humorous sayings or break out in song.”

Darrell K Royal led the Longhorns for 20 years (1956-1976) and guided them to three national championships, 11 conference titles and an overall record of 167-47-5. He remains the winningest coach in program history, and The University of Texas renamed its stadium after him in 1996.