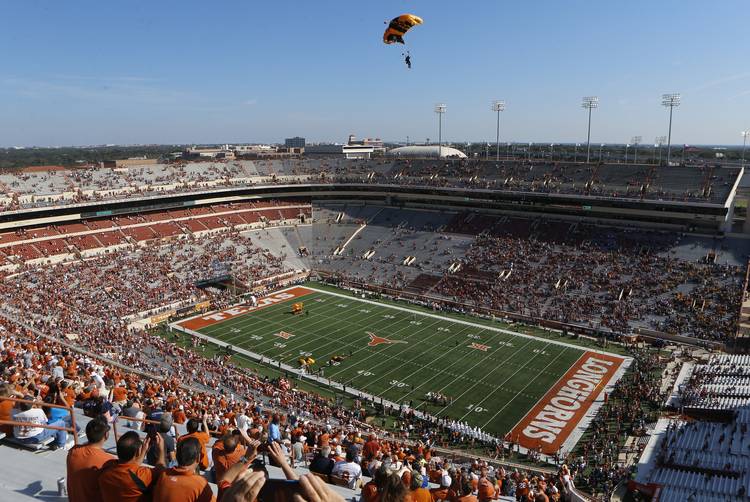 In 1924, Texas athletic director L. Theo Bellmont’s dream of a concrete football stadium became a reality when “the largest sports facility of its kind in the Southwest” opened on campus. Bellmont had wanted to replace an older venue, Clark Field, which featured wooden stands, and in 1923 he along with a group of student leaders convinced the board of regents to build a new stadium. In January of 1924, the project began.

After its completion, the stadium was dedicated to the 198,520 Texans who fought in the first World War, and thus Texas Memorial Stadium was born.

At the time it opened, the stadium cost $275,000 and could hold 27,000 people. Of course, that number increased when the Longhorns played Texas A&M for the first time in 1924, when temporary bleachers were inserted and the crowd size increased to 33,000 people for the Longhorns’ 7-0 win on Thanksgiving Day.

Since those overflow bleachers were inserted in the first year, the stadium has gone through 15 expansions and changes. Going from grass field to Astroturf  to Certified Bermudagrass to FieldTurf as well as having a track to not having a track and multiple scoreboard changes — Memorial Stadium continues to grow today.

In 1972, Texas dedicated its scoreboard to the great Freddie Steinmark.

Of all the changes and additions, the one in 1996 had biggest impact. Not only was this the year in which the Astroturf was removed and a new Sony Jumbotron was installed, it was also the year that Texas rededicated the stadium, on Veterans Day, to include all military veterans. But of course, it also got a name change. In 1996 Texas honored legendary coach Darrell Royal by renaming the stadium “Darrell K Royal-Texas Memorial Stadium.”

For short, many Texas fans refer to the stadium as “DKR” or “Royal-Memorial Stadium.”

In 1997, Texas named the field at Royal-Memorial Stadium after legendary Texas attorney and Longhorn alumnus Joe Jamail. One of the most prominent Texas boosters officially became apart of the stadium as it was now “Darrell K Royal-Texas Memorial Stadium and Joe Jamail Field.” Another prominent booster, Red McCombs, etched his name into the stadium’s history when in 2008 with the Red McCombs Red Zone food court was added.

Currently, Royal-Memorial Stadium has the eighth largest capacity in the FBS  at 100,119.

The largest crowd to ever watch the Longhorns play a game in Austin was in 2016 when 102,315 fans watched Texas beat Notre Dame 50-47 in overtime.

WATCH: Longhorn Network explains how OF Tuesday DerMargosian got her name