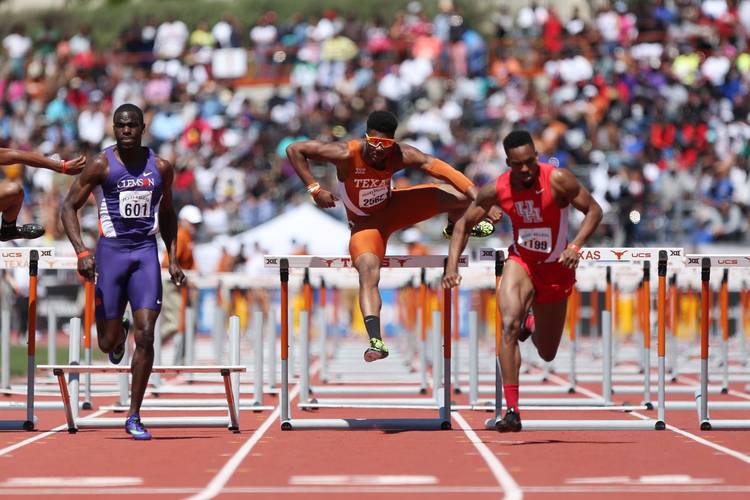 Over the weekend, two hurdlers helped Texas leap over its competition at the Big 12 outdoor track and field meet.

Competing in Lawrence, Kan. on Sunday, Texas junior Spencer Dunkerley-Offor and sophomore John Burt placed first and third in the final for the 110-meter hurdles. The Texas men received 16 points for those two finishes, and the Longhorns went onto beat second-place Kansas by 10.5 points. Texas has won the Big 12’s last three outdoor championships.

The runner-up in the 60-meter hurdles at the Big 12’s indoor meet in February, Dunkerley-Offor ran a personal-best time on Sunday to secure his championship. Those gold and silver showings came a year after he missed the 2016 indoor and outdoor seasons with a knee injury.

“I’m always looking to do better and I’m just pushing myself,” Dunkerley-Offor said during this indoor season. “But after Big 12s as soon as I came off the track I went up to my coach and she was like ‘Where were you this time last year?’ I was sitting at home watching. So I’m definitely happy no matter what. I have to look back and I’m definitely happy.”

Dunkerley-Offor graduated from nearby St. Stephen’s High, and he was going to play men’s volleyball at George Mason before Texas’ track team came through with a late scholarship offer. He was not the only two-sport athlete on the Big 12’s medal stand.

Burt, of course, is a receiver on Texas’ football team who has caught 46 balls over the last two years. Burt skipped the indoor season to focus on football, and he returned to the track for a meet on April 29. His time of 13.77 seconds on Sunday was actually better than the 13.98-second performance that won him a silver medal at last year’s Big 12 outdoor meet.

The history of Royal-Memorial Stadium

Foreman at Texans rookie camp: ‘I’m ready to step on the field and be productive whenever they call my number’