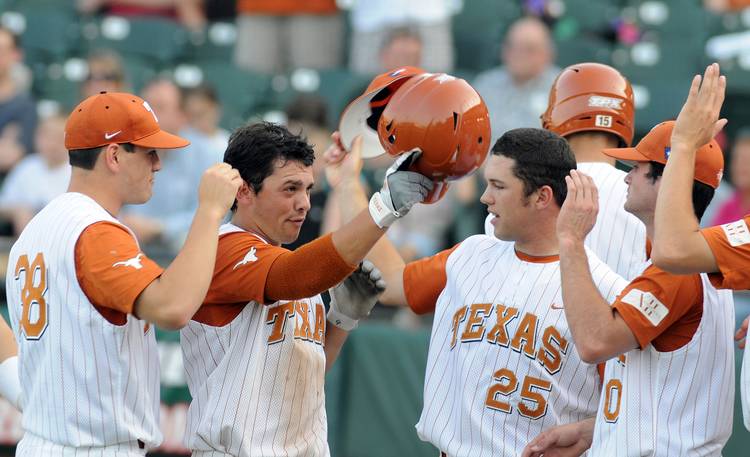 Michael Torres (second from left) celebrates with his teammates after hitting a two run home run in the third inning during the Longhorns matchup against Texas State on Tuesday. 4/8/08 photo by Patrick Meredith for American-Statesman

May 15 is a date that may stand out to some baseball fans.

On this date in 1941, New York Yankees outfielder Joe DiMaggio singled in 13-1 loss to Chicago’s White Sox. DiMaggio’s 1-for-4 performance was the opening chapter in a 56-game hitting streak that is still the gold standard among baseball’s batters.

You, of course, are currently reading about the Yankees on a website devoted to covering the University of Texas. So let’s segue into a chat about Texas’ longest hitting streaks.

The baseball team’s record belongs to Michael Torres, who recorded hits in 25 consecutive games in 2008. Torres began his streak by going 3-for-4 against nationally-ranked Rice on March 11. The junior infielder didn’t stop hitting until a 13-10 loss to Oklahoma State on April 20.

Taylor Hoagland owns the softball program’s longest hitting streak. Hoagland began her hitting streak on April 29, 2010, and that 26-game run carried over to Feb. 26 of the following season. Hoagland also claims the second-longest streak in school history, a string of 21 straight games in 2010.

Foreman at Texans rookie camp: ‘I’m ready to step on the field and be productive whenever they call my number’