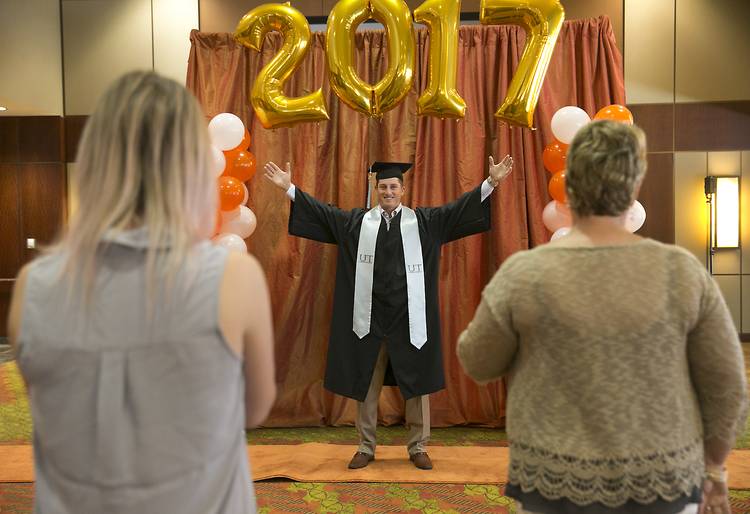 Texas baseball player Bret Boswell poses for a photo to celebrate his graduation from the university. The University of Texas athletic department held a celebration reception for its 2017 graduates in the Texas Centennial Room in Bellmont Hall Friday morning May 19, 2017. RALPH BARRERA/AMERICAN-STATESMAN

Over the weekend, a total of 80 current and former University of Texas athletes participated in graduation ceremonies. For some, it marked the end of a four-year journey of self discovery on and off the playing field.

For others, graduation meant returning to the campus they once wowed with athletic skill and bringing their UT experience full circle with a degree. Perhaps the most notable graduate was former men’s basketball star T.J. Ford, but scroll below and you’ll find social media reactions from a myriad of athletes.

GALLERY: UT Athletic Department celebrates its graduates on May 19

Today I accomplished one of my childhood goals…graduating from the University of Texas! Thankful for my family's support! #Hook'em 🤘🏼 pic.twitter.com/oGeX51FCoG

Graduate in the morning, play ball in the evening. Congrats to our guys. 🎓🤘 pic.twitter.com/Am7Gy8xvBs

Congrats to our latest group of graduates, Smacker Miles among them! pic.twitter.com/3RuQSmWwQs

My parents always said "degree first, then worry about everything else" And 3 1/2 years later, through the hard times and the good times I somehow made it! Thankful for all of those that supported me through this journey! It's only the beginning. Let's ride! #hookem #graduate

Congratulations to ALL of our @UTAustin graduates, especially those from our team, like Rachel Fleming! pic.twitter.com/9N4Fi1TTkg