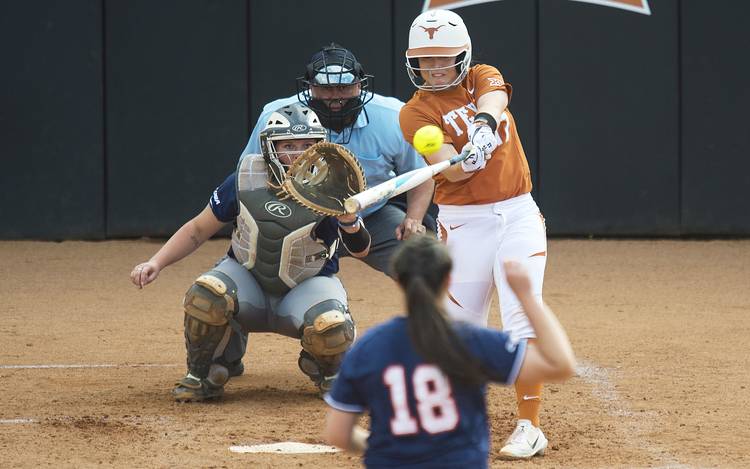 Texas catcher Taylor Ellsworth takes a swing during the 2017 season. Ellsworth was one of five Longhorns to earn all-Big 12 honors while working with hitting coach Tripp MacKay. (CREDIT: Texas athletics)

Texas wrapped up its 2017 softball season with a 3-1 loss to Texas A&M at a NCAA regional in College Station on Sunday.

After logging the third-most losses in school history, Texas (33-26) must now focus on its future. Seven seniors were on the UT roster, and all-conference honorees Tiarra Davis and Devon Tunning belong to the Class of 2017. Moving forward, though, the Longhorns should feel confident with their situation behind the plate.

In February, we brought you the story of Texas freshman catcher Taylor Ellsworth. A Georgetown native, Ellsworth joined the Texas softball team this year after skipping her final semester of high school. Therefore, Ellsworth was a college freshman during what should have been her senior season at Georgetown.

READ MORE: With high school in the rearview, Taylor Ellsworth is already contributing for Texas

Ellsworth appeared in 44 games, and she was Texas’ full-time starting catcher by the end of the season. Ellsworth hit three home runs and contributed 24 RBIs and 21 runs. She became the first freshman to lead Texas in batting average since Taylor Hoagland hit .382 in 2010, and Ellsworth’s .394 mark ranks in a tie for eighth in the Texas record books.

Earlier this month, Ellsworth was the only Longhorn to earn first-team all-conference accolades.

Besides Ellsworth, we found six freshmen across the country who has begun their collegiate careers after graduating ahead of schedule. Here is how they fared in 2017: