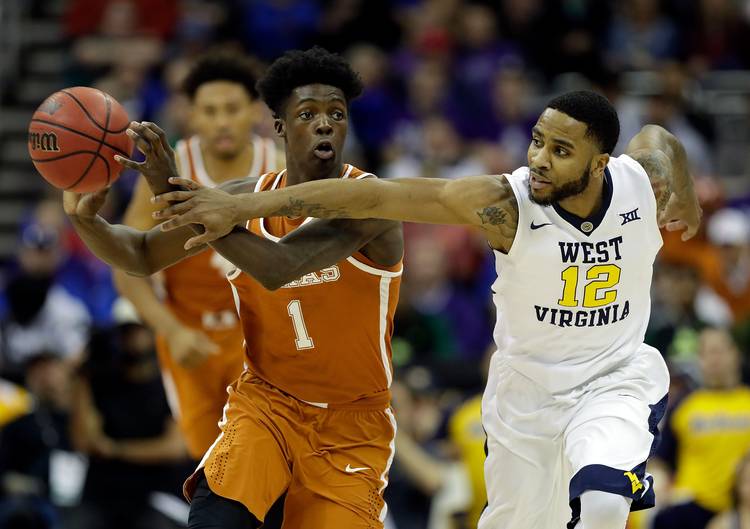 Andrew Jones #1 of the Texas Longhorns controls the ball as Tarik Phillip #12 of the West Virginia Mountaineers defends during the quarterfinal game of the Big 12 Basketball Tournament at the Sprint Center on March 9, 2017 in Kansas City, Missouri. (Photo by Jamie Squire/Getty Images)

The NBA Draft deadline has passed, the 2017 recruiting cycle is nearly done and the only thing remains is watching the transfer market smooth out over the summer.

College basketball rosters are nearly complete. In the Big 12, some of the biggest stars who could return, have returned.  And new stars are arriving.

At Texas, the Longhorns welcome the best recruit in the conference in Mohamed Bamba. He joins four other top-100 recruits, including point guard Matt Coleman. The Longhorns have one scholarship available and could add another piece. National college basketball reporters are saying the last remaining 5-star recruit available is still considering Texas and could be leaning Longhorns.

But that player, Brian Bowen, has been rumored to be leaning to a number of programs, so who knows where he’ll play?

What we do know is this week Texas, West Virginia, Kansas and Texas Tech all received good news with key members of their 2016-17 starting lineups announcing they were returning to school.

West Virginia is getting one of the nation’s best defenders back in Jevon Carter. Kansas is getting a 3-point specialist back in Svi Mykhailiuk. Zach Smith at Texas Tech is returning.

At Texas, Andrew Jones’ announced return on Monday capped off an amazing May for the Longhorns.

In ESPN’s “way-too-early” preseason top 25 ranking, Texas has cracked the top 25, one of just three Big 12 teams to do so. ESPN writes “We’ll start here with honesty: We’re not sure about this. We’ve placed a dozen teams — seriously — in this spot, but finally settled on the Longhorns.”

Their reasoning is the influx of talent joining the young players Texas had last season, Adding “Texas won 11 games last season, but the Longhorns are trending in the other direction right now.”

The two other teams in the ranking are No. 2 Kansas and No. 9 West Virginia.  Earlier this off-season, Baylor was in the top 25, but the loss of Johnathan Motley to the NBA seems to have lowered their expectations and out of the rankings.

Who is the most irreplaceable Longhorn next football season?