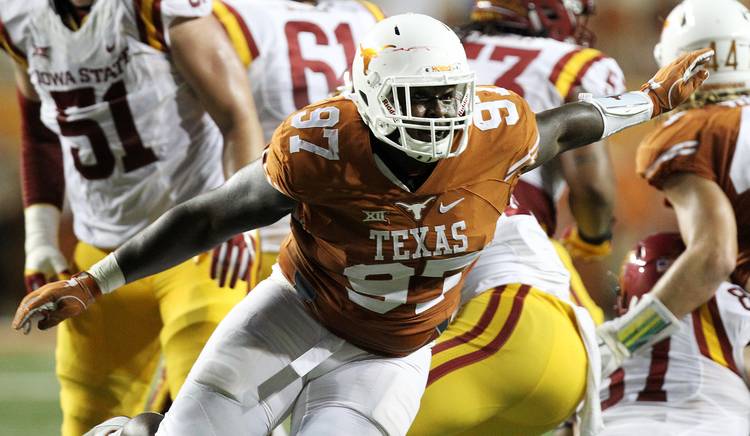 Let’s use Texas’ roster, history and scouting reports to countdown to the start of the 2017 football season. Today, we are only 97 days away from Texas’ home game against Maryland.

Which Longhorn wears No. 97? Junior DT Chris Nelson. An eight-time starter during his sophomore year, the 6-3, 300-pound Nelson collected 45 tackles and 1.5 sacks over Texas’ 12 games. Thanks to an eight-tackle performance against Notre Dame, Nelson was also the only Longhorn defender to win a Big 12 Player of the Week award in 2016.

Fun fact about No. 97: No offensive play in the history of Texas’ football team has covered more yards than Wane McGarity’s 97-yard catch against Oklahoma in 1998. During a 34-3 rout of the Sooners — a game that may be remember more for Ricky Williams wearing the late Doak Walker’s No. 37 — McGarity turned a pass from Major Applewhite into a 97-yard score. Two years later, Applewhite was also responsible for a 96-yard touchdown pass.