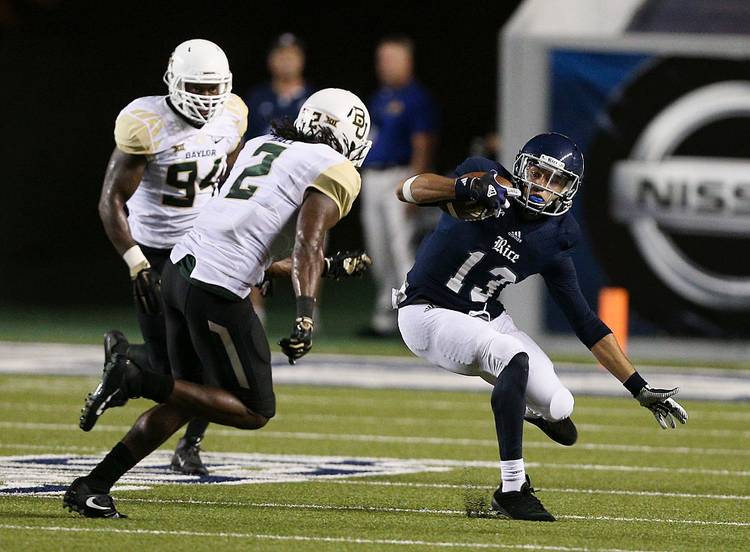 Nate German #13 of the Rice Owls looks to avoid the tackle of Davion Hall #2 of the Baylor Bears and Xavier Jones #94 in the second half at Rice Stadium on September 16, 2016 in Houston, Texas. Baylor Bears won 38-10. (Photo by Bob Levey/Getty Images)

When looking for an example of the talent that was flowing into Baylor at the height of the Art Briles era, look no further than Davion Hall. A product of Liberty-Eylau, he came to Waco as the No. 7 player in the Austin American-Statesman 2014 Fabulous 55, and was ranked No. 49 overall in that year’s class. He started off as a receiver, but moved over to the defense last season and recorded 51 tackles, an interception and a forced fumble from safety. The Bears will rely heavily on him in 2017.

At 6-foot-2, 205 pounds and with the ball-hawking skills of a receiver, quarterbacks need to be wary of Hall. Check out how he high points this pass by SMU quarterback Ben Hicks intended for a wide open receiver eight yards behind Hall.

That’s great awareness by Hall, who reads the quarterback’s eyes. It’s also a freshman mistake by Hicks not to put a little more air under the pass. Texas quarterback Shane Buechele made some of those in 2016, but he won’t want to get lazy around Hall. As you can see, he’s dangerous with the ball in his hands.

Hall didn’t start against the Longhorns, but he made four tackles including a tackle for loss of quarterback Tyrone Swoopes on the game’s final drive. He didn’t record any stats in 2014 or 2015.

Golden: Longhorns won’t be overmatched, have great chance to win in California