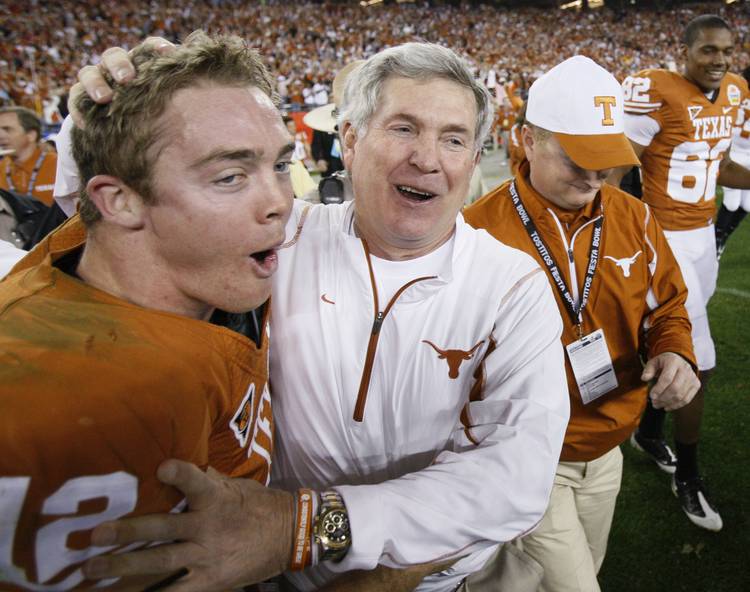 It’s simply impossible to tell the story of the Texas Longhorns without Mack Brown.

As the winning coach in what is considered possibly the best national championship game ever, it’s hard to tell the story of college football without him, too.

Brown is one of six coaches on the 2018 College Football Hall of Fame ballot unveiled Thursday by the National Football Foundation. In 16 seasons, Brown led the Longhorns to a 158-48 record, two Big 12 titles and a victory over USC in the 2005 national title game. Brown also led the Horns to the 2009 national title game against Alabama.

“Any recognition I’ve received, or been considered for, honors all of the coaches, players and staff that have been a part of our program for many years,” Brown said in a statement via a UT spokesman. “They are the reason my name is on the College Football Hall of Fame ballot, so most importantly I thank them.

“It truly is an unbelievable honor to even be considered,” Brown added.

With a down-home manner, the Cookeville, Tennessee, native energized the UT program upon his arrival prior to the 1998 season. The Longhorns posted a 10-5 record in bowl games as the program finished in the top 15 in 10 of his last 14 seasons.

Brown finished his coaching career with a 244-122-1 (.666) record in 30 seasons overall, which includes stops at Appalachian State, Tulane and North Carolina.

Since leaving Texas, Brown has grown in his role as an ESPN college football analyst. However just this week, the coach said he would be open to working the sidelines again.

“There is no doubt that if the right situation came up, I would coach again,” Brown said during an interview on Sirius/XM. “If someone needed me that I trusted, I’ve got some good years left and I would definitely look at it. I’ve looked at a couple things the last couple of years and they didn’t fit. I’m not gonna force it. I’m not gonna coach just because I have to coach, but if it’s right and it was fun I’d love to make another run.”

The sheer amount of success that happened on Brown’s watch in Austin is hard to overstate.

While at UT, Brown had 71 players taken in the NFL draft, with 55 going in the first four rounds.

To be eligible, coaches must have worked a minimum of 10 years and 100 games, won at least 60 percent of his games and be retired for three full seasons.

The same criteria holds for former Virginia Tech coach Frank Beamer, who is also on the Hall of Fame ballot, along with one-time Texas Tech coach Jim Carlen. In total, the ballot also features 75 players from the Football Subdivision ranks along with 98 players and 31 other coaches from the lower levels.

“I’ve been to the event many times, met so many wonderful people and have great admiration for the National Football Foundation and everyone involved in it,” Brown said. “The names, the legends, my heroes, the College Football Hall of Fame is a really amazing fraternity. What a tribute this nomination is to everyone who ever played, coached or worked in our programs.”