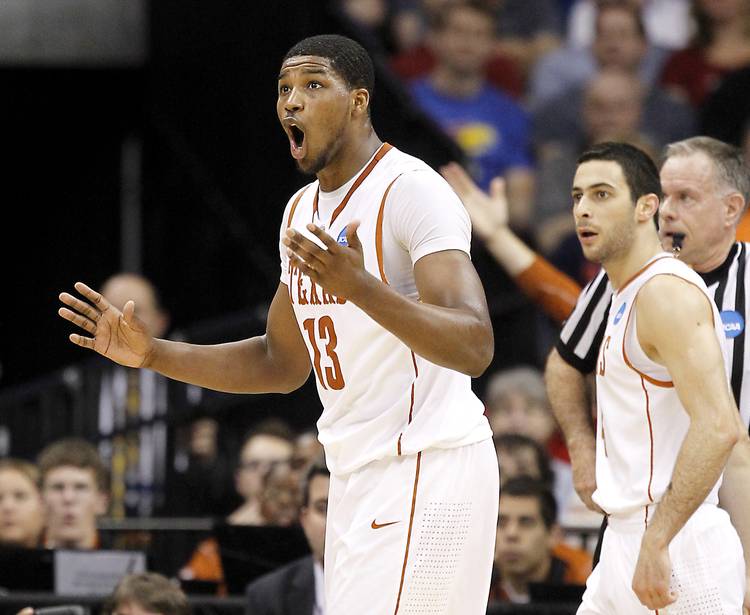 ORG XMIT: 1102706 Texas forward Tristan Thompson (13) reacted to being called for a foul during first-half action in the third round of the men's 2011 NCAA basketball tournament against Arizona at the BOK Center in Tulsa, Oklahoma, Sunday, March 20, 2011. (Shane Keyser/Kansas City Star/MCT)

For the third year in a row, former Longhorn standout and top-5 NBA Draft pick Tristan Thompson will compete for an NBA Championship as the Cleveland Cavaliers take on the Golden State Warriors starting Thursday.

But unlike the last two years, Thompson is not the only Longhorn playing in the Finals.

Golden State added the most accomplished post-Longhorn basketball player ever (and let’s face it, possibly the greatest player who has ever worn burnt orange) in Kevin Durant.

The former NBA MVP, perennial All-Star and likely future Basketball Hall of Famer (and he’s not even 30 yet) joined the Warriors about 11 months ago, and now he’s on the cusp of his first championship.

Thompson once had a reputation as an underachiever taken 11 sports before Kawhi Leonard, seven spots before Klay Thompson and yes, All-Star Jimmy Butler was the 30th pick to Thompson’s fourth pick in 2011. Thompson’s play the last two finals changed everything. He was Cleveland’ second-best player in the 2015 NBA Finals. He was the third-best player on the Cavaliers during the finals last year, as he seemingly grabbed every rebound in his eyesight.

Now Thompson is working on an $82 million dollar contract and no one questions the Cavs’ choice in 2011.

The Oklahoma City Thunder, in 2016, had the Golden State Warriors down 3-1 in the Western Conference Finals before Klay Thompson took over Game 5 and the Warriors rallied to win the series in seven games. Instead of having the fire the re-sign with the Thunder and take on the Warriors in the West, Durant opted to live and play basketball in the Bay Area.

Can anyone really blame him? Durant’s new-ish Youtube channel shows us where he lives. It’s hard to watch those videos and scream “he made the wrong choice, he should have stayed in Oklahoma!”

I for one am grateful that Graham Nash decided to team up with David Crosby and Stephen Stills, then add Neil Young for the second album.

So two Longhorns have taken two different paths to this finals. One is a story or acceptance and success but both are kind of redemption stories, unless Durant falls, then it’s probably more of a tale of basketball gluttony and over-indulgence (those may be the same thing).

Thompson and Durant show just how awesome Rick Barnes was at recruiting. Neither are Texans.

Durant is from Maryland.

Thompson is Canadian, who played prep basketball in the United States.

Both were McDonald’s All-Americans. Durant was the No. 2 player in his recruiting class. And that’s only because he happened to be in the same class as one of the greatest basketball prospects of all-time, Greg Oden, who’s pro career was cut down due to injury. Oden led his Ohio State team to the Final Four in 2007 and was taken No. 1.

Thompson was the No. 11-rated recruit in his class, which included Harrison Barnes and Kyrie Irving.

Despite Durant’s historically great season, in which he won the Wooden Award and essentially every national player of the year award, Thompson’s team had a better season. The Longhorns finished second in the Big 12 in 2011 with a 13-3 record. Durant’s 2007 team was third. Thompson’s team won two more games overall.

Reserve forward Matt Hill was on both teams.