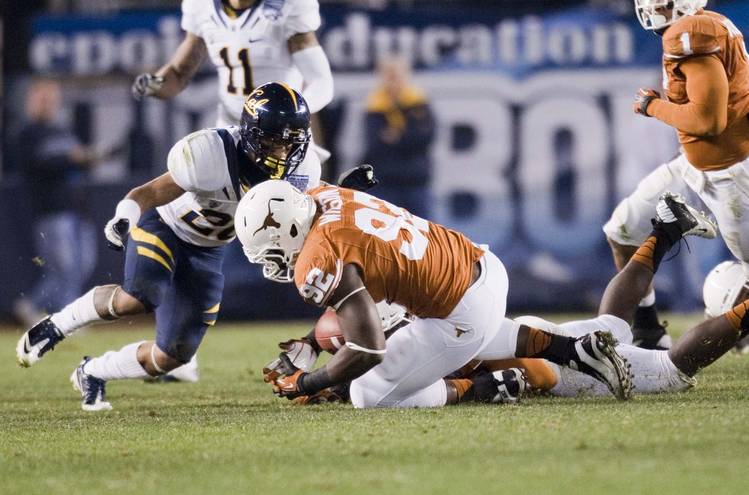 Ricardo B. Brazziell AMERICAN-STATESMAN 12/28/11 The University of Texas Longhorns NO. 92 Reggie Wilson recovers a fumble against the University of California Golden Bears during the Bridgepoint education Holiday Bowl on Wednesday, December 28, 2011 at the Qualcomm Stadium in San Diego, CA.

Let’s use Texas’ roster, history and scouting reports to countdown to the start of the 2017 football season. Today, we are only 92 days away from Texas’ home game against Maryland.

Which Longhorn wears No. 92? Nobody. DE Reggie Wilson was No. 92 in your program from 2010-13, but nobody has worn that jersey since Alex Mercado and Quincy Vassar donned it during the following two seasons. Wilson played in 51 games at Texas, and he did not miss a contest during his four years.

Fun fact about No. 92: Senior Armanti Foreman led Texas with last season’s 34 catches. He won’t have the most bragging rights in Royal-Memorial Stadium this fall, however. Quan Cosby, who does sideline reporting for the Longhorns’ radio broadcasts, had a 92-catch season at Texas in 2008, which ranks behind only Jordan Shipley’s 116 catches in 2009 and Kwame Cavil’s 100 receptions in 1999.