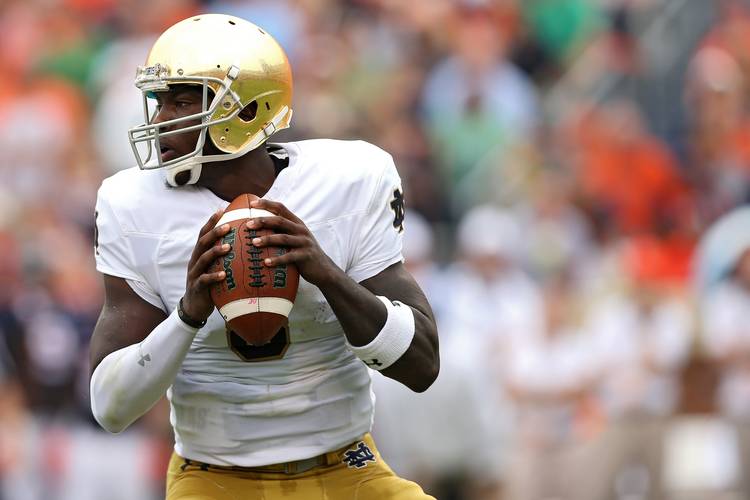 Quarterback Malik Zaire (8) of the Notre Dame Fighting Irish looks to pass in the first quarter against the Virginia Cavaliers at Scott Stadium on September 12, 2015 in Charlottesville, Virginia. (Photo by Patrick Smith/Getty Images)

There won’t be any confusion when someone in the Texas locker room calls out the name “Malik” this fall.

This Just In: Former Notre Dame QB Malik Zaire plans to transfer to Florida & join the team as a graduate transfer. https://t.co/HGVMjo3Vok pic.twitter.com/nhJL1SHtcZ

Previously, SEC schools whose grad transfers did not acquire all of their APR points were not allowed to accept more grad transfers for a three-year period. Friday’s ruling lowered that penalty to one year.

The Gators were in violation of the policy after Mason Halter and Anthony Farrell failed to meet their academic requirements in 2015.

They also missed out on Arizona transfer Anu Solomon — now at Baylor — although Solomon said he never heard from Texas.

Zaire was this year’s most high-profile grad transfer, with Florida, Texas, Wisconsin reportedly in the mix along with Harvard. Zaire started the first two games of 2015 for Notre Dame — including the season opener against Texas — before breaking his ankle at Virginia. He shared snaps with Deshone Kizer against the Longhorns last fall, but Kizer seized the job with his performance in that game.

Assuming it doesn’t land a late grad transfer, Texas will enter the 2017 season with only two scholarship quarterbacks. Incumbent starter Shane Buechele is expected to maintain that role ahead of true freshman Sam Ehlinger, but Herman declined to name a starter following spring practice.

One thing is certain: At least for now, star linebacker Malik Jefferson remains the only Malik on the Longhorns’ 2017 roster. Unfortunately, he doesn’t play quarterback.