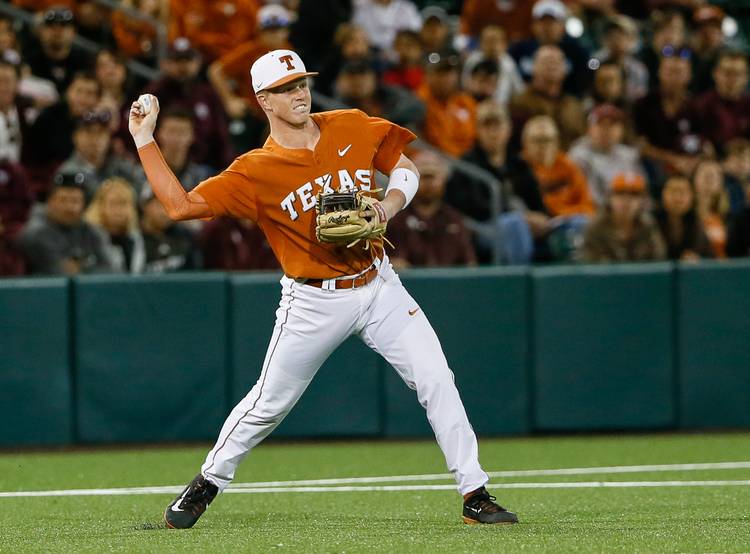 Ryan Reynolds (#37) fields ball to make a forced out at second base in a game of the Texas A&M University versus the University of Texas at UFCU Disch-Falk Field in Austin, Texas on March 14, 2017 (Andy Nietupski for AMERICAN STATESMAN)

LONG BEACH, Calif. — It took 12 innings, but Texas moved within a win of a regional championship with a 5-3 victory over Long Beach State on Saturday.

Texas hit three home runs in the win, but the evening’s biggest moment was a game-saving defensive play by third baseman Ryan Reynolds in the 10th inning. After the game, UT head coach David Pierce said the play should be featured in SportsCenter’s daily rundown of the sporting world’s top highlights.

We don’t have a highlight show, but we did think it would be fun to rank five of Texas’ 2017 web gems. Ahead of yesterday’s win, Texas ranked second among NCAA Division I teams in fielding percentage and double plays. In other words, the pickings for defensive highlights weren’t slim.

Agree with our rankings? Disagree? Leave your thoughts in the comments section…

Clemens leads Texas in most of the offensive statistics that matter (batting average, home runs, RBIs, runs), but he also boasts a .991 fielding percentage at first base. Clemens is tied to five errors this spring, but none of those miscues were committed in UT’s 4-3 win over Texas A&M. (Fast forward to the 1:25 mark of the above video).

With one out in the eighth inning, Texas A&M attempted to squeeze in the game-tying run from third base. Clemens read the bunt, and he fed the baseball to catcher Michael Cantu for the out. The play stalled an Aggie rally that had turned Texas’ 4-1 lead into a one-run ballgame.

Patrick Mathis with a GAME SAVING SNAG for Texas in the bottom of the 9th! #RoadToOmaha pic.twitter.com/q5SmaSgvCH

Over the first eight innings of Texas’ NCAA tournament game at Long Beach State on June 3, fans were treated to four home runs and a pitching duel. Then the UT defense took over. With the game tied, Long Beach State pinch-hitter Alex Muzzi smacked a ninth-inning pitch into right field. Mathis sprinted and dove for the ball, and he forced extra innings with a spectacular catch.

Long Beach State had a runner on second base, so a hit into the outfield would have led to a throw home and a possible win for the Dirtbags. Texas instead saved its play at the plate for the 10th inning. (More on that later).

Thanks to a web gem against West Virginia last month, Mathis would have made this list regardless.

If you didn’t notice the renovations at UFCU Disch-Falk Field at the beginning of the year, you did during Texas’ 6-5 win over Kansas State. One of the designs drawn up on David Pierce’s ballpark blueprint was a shortened fence in front of the bullpen in left field, which the 5-11 Shaw took advantage of to take away a home run.

A freshman shortstop, Hamilton has used his glove to drop many jaws during his first year on campus. Hamilton has been responsible for 207 defensive assists, and he is six outs away from owning ninth place on Texas’ single-season chart. One play against Baylor, though, stands out among the rest.

In the eighth inning, Hamilton dove to his right to snag a grounder by Baylor clean-up hitter Matt Menard. The strong-armed Hamilton — who was once a quarterback at San Marcos High — then gunned the baseball across the infield. With a scooping assist from Clemens, Hamilton recorded the acrobatic out.

ICYMI: Texas executed a perfect barehand relay to cut down the would be walk-off run in the 10th!!

You could make a case for Hamilton at No. 1. It’s hard to argue, though, against Reynolds, who made his play on a larger stage. That stage was a NCAA regional game at Long Beach State.

With two outs in the bottom of the 10th, Long Beach State leadoff hitter Jarren Duran hit a ball that was misplayed by Austin Todd in left field.  Duran has speed — and a team-high 16 steals — so he easily converted Todd’s mistake into a triple. He then attempted to turn that triple into an inside-the-park homer.

Todd hurled the ball from the fence into the infield, where Reynolds bare-handed it before immediately firing it home. Cantu handled Reynolds’ throw and applied the tag on Duran, who had attempted a head-first slide into home. After Cantu showed umpire Morris Hodges the baseball, Duran was called out.

Had Duran scored, Long Beach State would have walked off with a 4-3 win and pushed Texas to the brink of elimination in the NCAA tournament. Texas instead scored twice in the 12th inning, and the Longhorns control their destiny at Long Beach State’s regional.