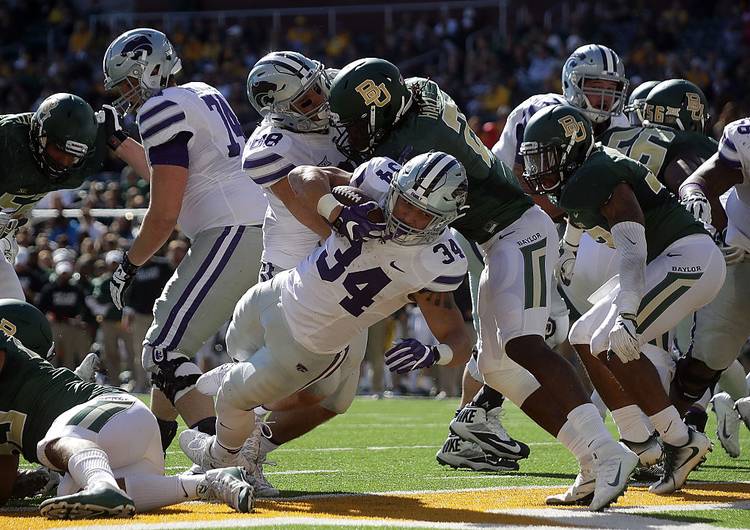 WACO, TX - NOVEMBER 19: Alex Barnes #34 of the Kansas State Wildcats runs for a touchdown against the Baylor Bears at McLane Stadium on November 19, 2016 in Waco, Texas. (Photo by Ronald Martinez/Getty Images)

Alex Barnes burst onto the scene toward the tail end of his first season, becoming the first Kansas State freshman to rush for 100-plus yards in back-to-back games. He totaled 442 rushing yards and led the Big 12 at 7.89 yards per carry. Barnes will hope he receives the majority of the Wildcats’ carries as a redshirt sophomore, but it’s a crowded backfield.  At 6-foot-1, 221 pounds, power is the the Pittsburg, Kansas, native’s strength. That power was on full display toward the end of 2016, when he rushed for 129 yards against Baylor and 103 against Kansas.

As mentioned above, Barnes isn’t the only back opponents will have to worry about. Junior Justin Silmon (464 yards) returns, and fullback Winston Dimel also figures to get some carries. David Warmack and Mike McCoy give the Wildcats depth few teams in the Big 12 can match. However, Barnes’ style fits best with K-State’s philosophy, which is to punch teams in the mouth with powerful running up the middle.

Barnes had yet to break through when the Longhorns and Wildcats faced off in October. He ran the ball four times for 17 yards.