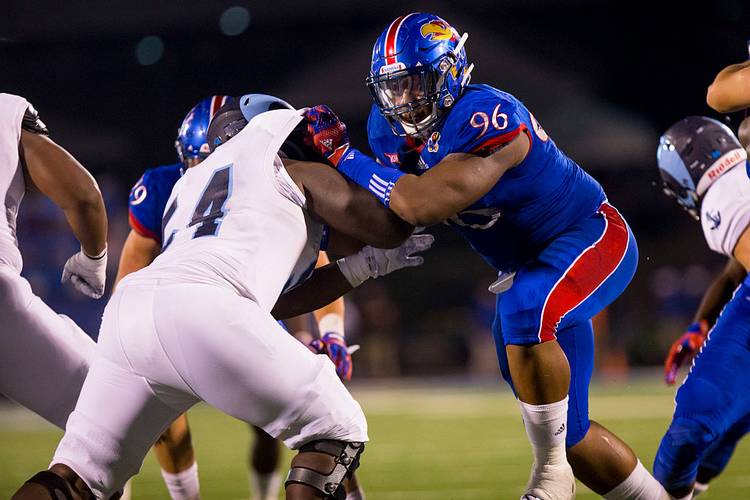 LAWRENCE, KS - SEPTEMBER 03: Daniel Wise #96 of the Kansas Jayhawks defends against Raess Johnson #54 of the Rhode Island Rams in the second half on September 3, 2016 at Memorial Stadium in Lawrence, Kansas. (Photo by Kyle Rivas/Getty Images) Raess Johnson ; Daniel Wise

Daniel Wise is Kansas’ other defensive lineman. Defense end and NFL prospect Dorance Armstrong gets most of the headlines, and rightfully so, but Wise is the other piece of one of the Big 12’s best duos. The 6-foot-3, 260-pound product of Hebron High School near Dallas had 38 tackles and 3.0 sacks in 2016. With even more attention on Armstrong this fall, those numbers should go up.

Having a Big 12 Defensive Player of the Year candidate next to him means Wise shouldn’t see too many double teams. How effective he can be might depend on the rest of the Jayhawks’ defensive linemen. If the likes of Isaiah Bean, Josh Ehambe, Isi Holani and J.J. Holmes can provide depth behind Armstrong and Wise, Kansas will cause matchup nightmares with its defensive front.

Wise was a worry for the Longhorns in 2016, piling up five total tackles including 3.0 tackles for loss and 2.0 sacks in the upset victory.

Wise comes from a strong football family. His father, Deatrich Wise Sr., played in the NFL with the Miami Dolphins and New Orleans Saints before moving on to a career as a teach and coach. His older brother, Deatrich Wise Jr., was drafted by the New England Patriots in the fourth round of the 2017 NFL Draft out of Arkansas, and he has a younger brother (Solomon) who plays for UTSA.