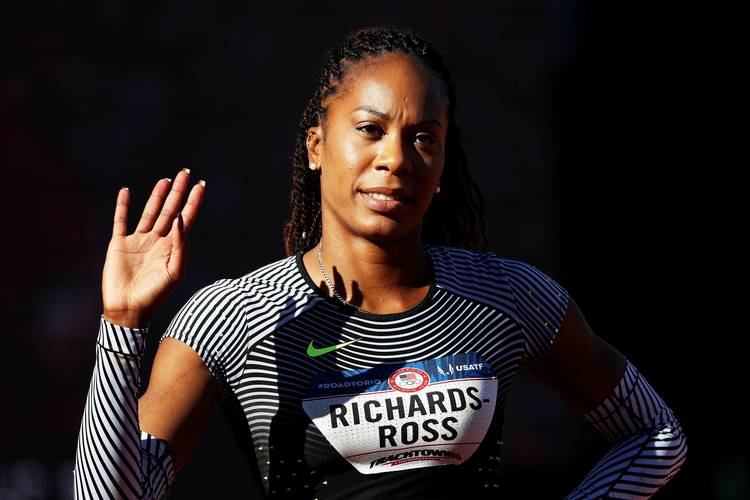 EUGENE, OR - JULY 01: Sanya Richards-Ross reacts after failing to finish in the first round of the Women's 400 Meter Dash during the 2016 U.S. Olympic Track & Field Team Trials at Hayward Field on July 1, 2016 in Eugene, Oregon. (Photo by Patrick Smith/Getty Images)

In her new memoir, “Chasing Grace,” five-time Olympic medalist and Texas ex Sanya Richards-Ross reveals that she had an abortion in the weeks leading up to the 2008 Summer Olympics in Beijing.

In excerpts provided to Essence, Richards-Ross writes about the decision she made with fiancé (now husband) former Longhorns All-American defensive back Aaron Ross.

“Over the phone, we didn’t go into details,” she writes . “As if not saying it would alleviate some of the guilt and the shame.”

In 2008, the couple were recently engaged and both excelling in their professional athletic careers. Ross was in training camp with the New York Giants when the couple found out they were expecting. The pregnancy was unexpected, especially given the timing with the Olympics and Richards-Ross’ expectations to win gold in the 400 meters.

“Everything I ever wanted seemed to be within reach,” she writes. “The culmination of a lifetime of work was right before me. In that moment, it seemed like no choice at all. The debate of when life begins swirled through my head, and the veil of a child out of wedlock at the prime of my career seemed unbearable. What would my sponsors, my family, my church, and my fans think of me?”

According to “Chasing Grace,” the abortion happened the day before Richards-Ross was set to leave for Beijing. Her doctor recommended she avoid exercise for two weeks after the procedure, but she didn’t have that much time.

In the 400 meters, she led for most of the race before fading to third in the final 50 meters. She eventually led Team USA to gold in the 4×400 relay, but the emotional toll of her decision stayed with her.

“I made a decision that broke me, and one from which I would not immediately heal,” she writes. “Abortion would now forever be a part of my life. A scarlet letter I never thought I’d wear. I was a champion— and not just an ordinary one, but a world-class, record-breaking champion. From the heights of that reality I fell into a depth of despair.”

"I literally don't know another female track athlete who hasn't had an abortion." @SanyaRichiRoss shares her story in 'Catching Grace' pic.twitter.com/tMHfT8RP4W

In an interview with Sports Illustrated Now on Tuesday, Richards-Ross discussed her story and put it in context with what she says is a prevalent issue among female athletes.

“The truth is, it’s an issue that’s not really talked about especially in sports,” she said. “A lot of young women have experienced this. I literally don’t know another female track and field athlete who hasn’t had an abortion. And that’s sad.”

When asked why, she continued: “It’s gonna sound silly to some people, but in our community people don’t want to take the pill because you put water weight on. Of course as an athlete you want to be able to stay as fit and as healthy as possible. Then people tell you that when you’re extremely fit you can’t get pregnant because our cycles are shorter. There’s a lot of mis-education that happens to young women in college because we’re educating ourselves.”

The release of the memoir is especially timely given that Richards-Ross and Ross are expecting their first child in August — a son. She recently spoke with Austin American-Statesman reporter Nicole Villalpando about the joys and challenges upcoming for their family.

You can find “Chasing Grace” on Amazon by clicking here.