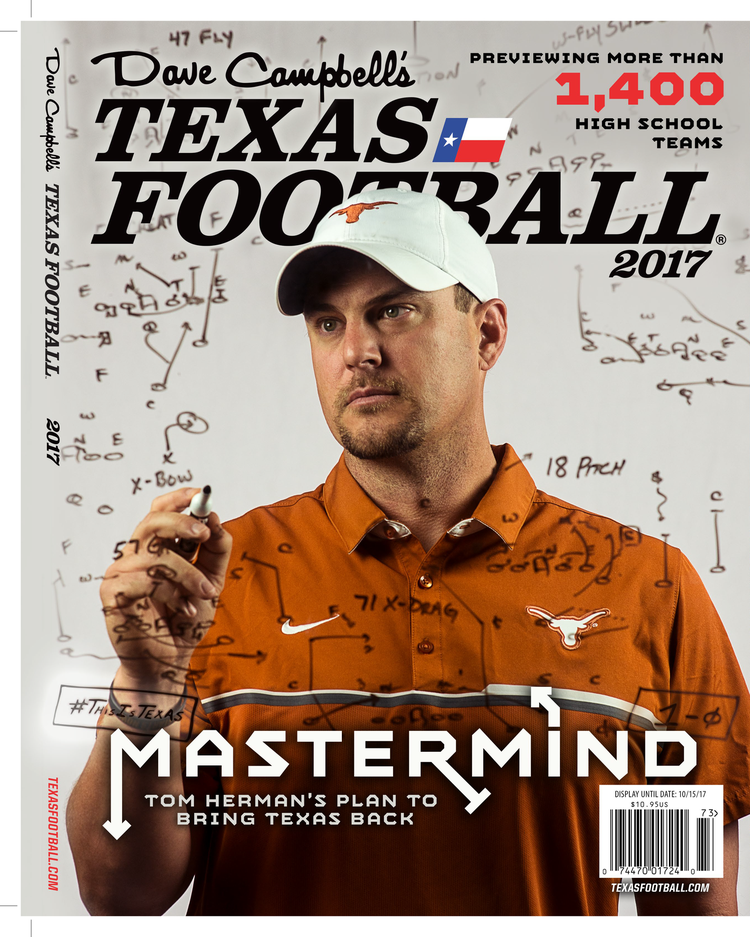 Texas coach Tom Herman has been placed on the cover of Texas Football Magazine. A Longhorn last appeared on the annual magazine's cover in 2009.

Tom Herman is coming to a newsstand near you.

Texas’ new football coach will appear on the cover of Dave Campbell’s Texas Football Magazine, the publication announced on Wednesday. A Longhorn has not been on the front of the magazine — which began printing in 1960 and is referred to by some as the “bible of Texas football — since Colt McCoy in 2009.

McCoy also appeared alongside three other quarterbacks in 2007, and the 2015 edition focused on Texas and Texas A&M’s rivalry. After his first season at Texas, Mack Brown was featured with TCU’s Dennis Franchione on the cover of the 1999 magazine. While he was at Westlake High in 2016, Texas freshman quarterback Sam Ehlinger appeared on a secondary cover for the magazine.

“Every year, our job is to put one of the most compelling stories in Texas on the cover of the magazine,” managing editor Greg Tepper said in a press release. “This year, I don’t think there’s any doubt that Tom Herman is the state’s most compelling figure — a cerebral, intense figure tasked with a clear goal: bring the Longhorns back to their former glory. In my view, it’s the story of the 2017 season in Texas.”

Dave Campbell’s Texas Football Magazine will hit newsstands later this month. In addition to profiles on Herman and Corpus Christi Calallen’s Phil Danaher, the state’s all-time winningest coach who is also featured on a secondary cover for the magazine, readers will find previews for all the state’s collegiate and high school teams.

A story on Cibolo Steele safety Caden Steans, who recently joined Texas’ 2018 recruiting class, will also be found in the magazine. For the first time, each of the pages in the Texas Football Magazine will be printed in color for the first time.