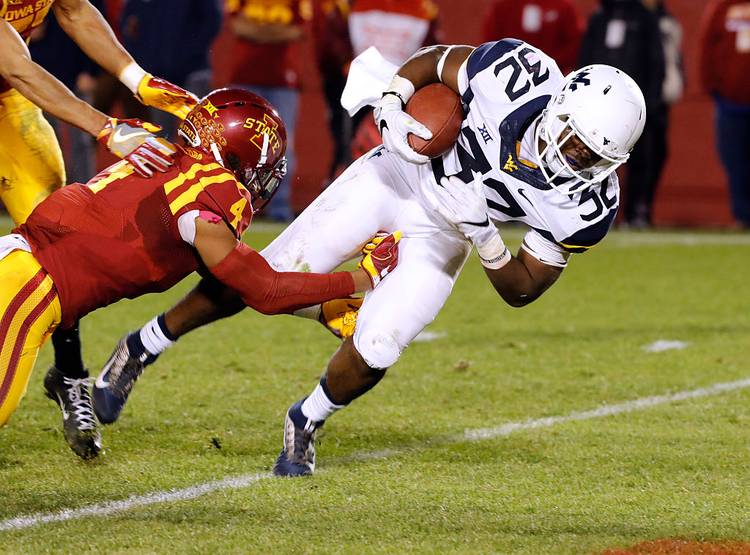 AMES, IA - NOVEMBER 26: Running back Martell Pettaway #32 of the West Virginia Mountaineers breaks away from defensive back Evrett Edwards #4 of the Iowa State Cyclones to score a touchdown in the second half of play at Jack Trice Stadium on November 26, 2016 in Ames, Iowa. The West Virginia Mountaineers won 49-19 over the Iowa State Cyclones. (Photo by David Purdy/Getty Images)

This is probably what Iowa State players were asking themselves as Martell Pettaway ran over, around and through them last November. In a rare situation, injuries to West Virginia’s top three running backs forced coach Dana Holgorsen to burn Pettaway’s redshirt in the 11th game of the season. The true freshman from Detroit responded with 30 carries for 181 yards and a touchdown in his college debut. “He’s probably the reason we won,” Holgorsen said afterward.

Where Pettaway fits into the Mountaineers’ rotation remains to be seen. He’s still stuck behind Justin Crawford (1,184 yards) and Kennedy McKoy (472 yards), who both established places in the Big 12 hierarchy in their first season. In theory, Pettaway’s presence gives West Virginia a three-headed monster.

As you can see in the video above, Pettaway is a sturdy runner who is hard to bring down. Assuming he is the third wheel behind Crawford and McKoy, his role will be to spell those two and keep the entire backfield fresh. If he’s successful, his presence should have the opposite effect on defenses.

On a more personal note