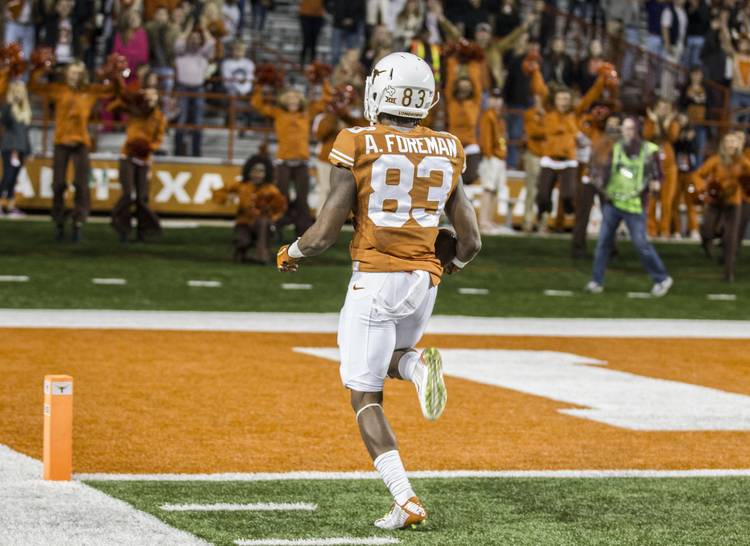 Texas Longhorns(83) Armanti Foreman run into the endzone for a score against TCU defense in the second half of the NCAA college football game at Darrell K. Royal Texas Memorial Stadium in Austin Texas Saturday, Nov 27, 2014. (RICARDO B. BRAZZIELL / AMERICAN- STATESMAN)

Let’s use Texas’ roster, history and scouting reports to countdown to the start of the 2017 football season. Today, we are only 83 days away from Texas’ home game against Maryland.

Which Longhorn wears No. 83? Nobody. Ex-Texas tight end Matt Center was assigned No. 83 in 2013, and he shared that number with fellow walk-on John Thomas Hildebrand in 2016. UT fans may not know that senior Armanti Foreman caught 10 passes in 2014 while wearing a No. 83 jersey. He switched to No. 3 the following season.

Fun fact about No. 83: In 1976, Earl Campbell recorded an 83-yard run against North Texas in which he was stopped at the four-yard line. (That run set up the game-deciding touchdown run by QB Mike Cordaro in the Longhorns’ 17-14 win). That 83-yard run is the longest non-scoring play in Texas’ record books. It also was the longest run that Campbell recorded over his four years at Texas and eight years in the NFL.