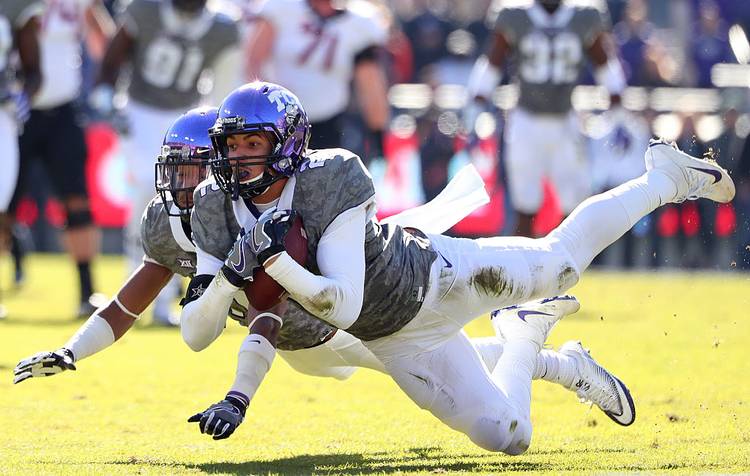 FORT WORTH, TX - NOVEMBER 19: Niko Small #2 of the TCU Horned Frogs dives for a pass intended for an Oklahoma State Cowboys receiver in the first quarter at Amon G. Carter Stadium on November 19, 2016 in Fort Worth, Texas. (Photo by Tom Pennington/Getty Images)

Among the bright spots in a disappointing season for TCU was Niko Small’s emergence next to Nick Orr in the defensive backfield. We’ll get to Orr later in this series, but Small earned his merits in 2016 with a team-high nine passes defended and 83 total tackles. The DeSoto product also had a pair of interceptions, including one off Texas quarterback Shane Buechele. The Horned Frogs will expect even more production from the 5-foot-10, 194-pound junior in 2017.

Word out of TCU’s camp indicates that Small added speed and size during spring workouts. Add those physical attributes to the experience he gained last season, and there is reason to believe Small will be even better this fall. He got better as last season wore on, earning TCU’s outstanding defensive player honor for a team-high 12 total tackles in the AutoZone Liberty Bowl against Georgia. He also had nine stops in the regular-season finale against Kansas State. Quarterbacks and receivers will have to be wary of the Horned Frogs free safety.

In addition to his pick on Buechele (in the video above), Small also had four tackles and two passes defended against the Longhorns in 2016. He didn’t record any stats against Texas as a freshman.

Any time someone mentions @WhatTheFreako this is all I think of pic.twitter.com/IixTJ3Svgx