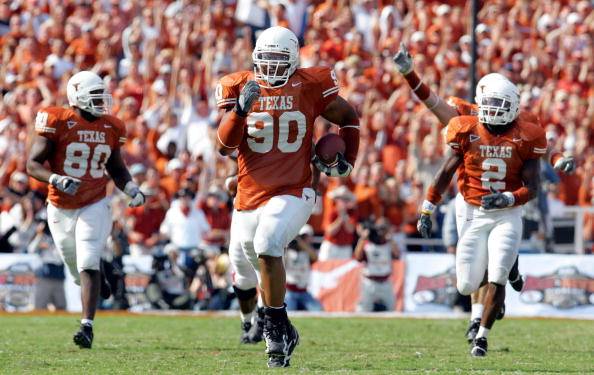 DALLAS - OCTOBER 8: Defensive tackle Rodrique Wright #90 of the Texas Longhorns runs a 67-yard fumble return for a touchdown against the Oklahoma Sooners on October 8, 2005 at the Cotton Bowl in Dallas, Texas. The Longhorns defeated the Sooners 45-12. (Photo by Ronald Martinez/Getty Images)

Rod Wright will be spending the summer with the San Francisco 49ers as part of the team’s coaching staff.

Wright, who was a Lombardi finalist and All-American in 2005, was hired by the 49ers as part of a diversity fellowship program named for former San Francisco coach Bill Walsh.

Seven others, including former Texas A&M quarterback Jerrod Johnson, will be part of the program with the 49ers. The eight will work with the team during their preseason training camp.

Wright was a seventh-round draft pick of Miami in 2006. He also spent time with the New York Jets and the CFL’s Saskatchewan Rough Riders.

Wright is the defensive line coach at Sam Houston State.