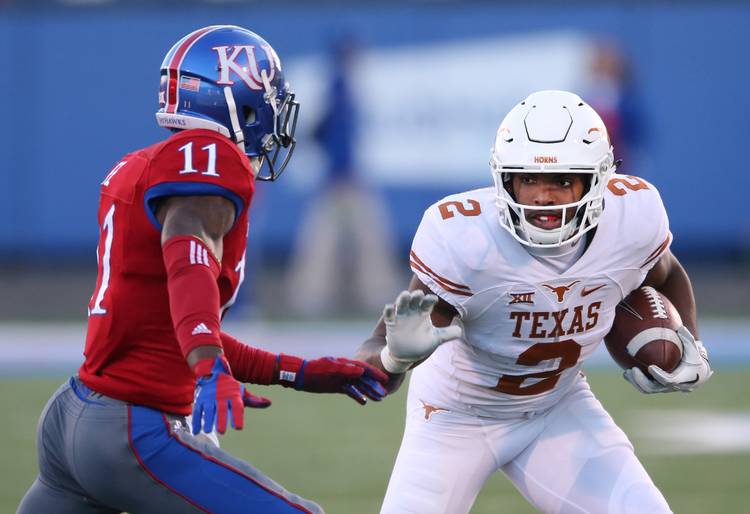 Texas's #2 Devin Duvernay and Kansas's #11 Mike Lee during the second half in Lawrence, Kansas on Saturday, November 19, 2016. DEBORAH CANNON / AMERICAN-STATESMAN

Selective amnesia could be the only excuse for Texas fans unfamiliar with this guy. Mike Lee had the game of his young career when Kansas upset the Longhorns last November. In addition to his game-changing interception in overtime, he also forced the D’Onta Foreman fumble that set up the game-tying field goal and made 12 tackles.

Those aren’t the only reasons Lee made this list, though. The rising sophomore from New Orleans is an emerging star in the Big 12. He finished his first season with 77 total tackles, 1.5 tackles for loss, four pass break-ups and two forced fumbles. Those numbers landed him on the second team of Athlon Sports’ All-Freshman squad.

Texas wide receivers should adopt the mindset of Kansas wide receiver Daylon Charlot, who made sure to avoid Lee’s wrath during the Jayhawks’ spring game: “Every time I came to the sideline and walked off the field, I said to myself in my head, ‘I always have to know where Mike Lee’s at because I’m not trying to get killed.”

Wait, how old is he?

Perhaps most impressive is the fact that Lee’s freshman season actually should have been the one upcoming. Instead, Lee graduated early from Landry Walker High School and arrived on campus a year early. This spring, he returned home for his senior prom and walked at graduation.