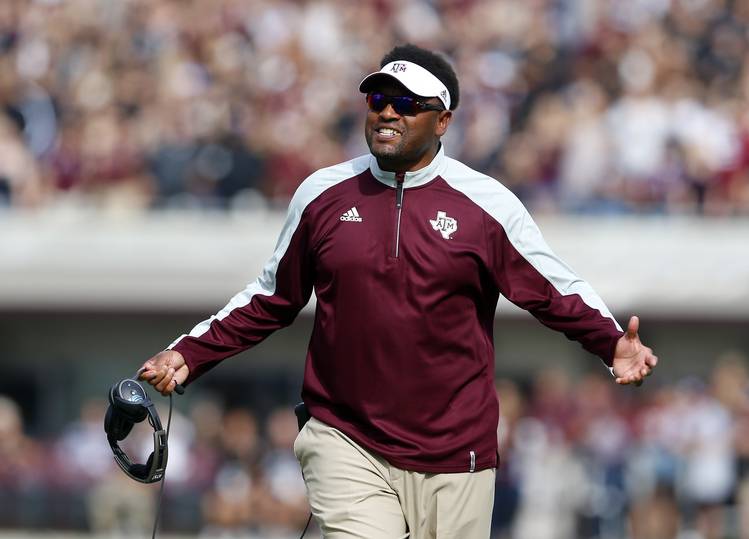 Head coach Kevin Sumlin of the Texas A&M Aggies reacts to a call during the first half of an NCAA college football game against the Mississippi State Bulldogs at Davis Wade Stadium on November 5, 2016 in Starkville, Mississippi. (Photo by Butch Dill/Getty Images)

Sumlin, in his sixth year as the Aggies’ head coach, was the featured draw at the annual Coaches Night sponsored by the Capital City A&M Club held at the H.E.B. Center.

And although Sumlin is fighting mightily with Tom Herman for the top recruits in Texas, he’s expecting success for the new Longhorns coach.  After all, former Houston Cougar head coaches stick together.

“Tom and I did satellite camps last year,” Sumlin said. “Obviously, we didn’t do them this year. We have a lot of things in common and we’ve known each other for a long time.

“He was at Rice and (Owls coach) David Bailiff is a really good friend.  … Obviously being at the University of Houston,  there’s some insight there. So I’ve known a Tom a long time. He’s very talented. He’s done a great job where ever he’s been. I don’t think that’s going to be any different.”

Sumlin also was asked the obligatory questions about whether the Aggies and Longhorns ever will play again in football. The two rivals haven’t played a football game since 2011. Then A&M left for the SEC.

“Me, personally? I think over the course of time that’s going to happen,” Sumlin said. “With our move to the SEC scheduling has become a real issue.”

Kevin Sumlin is "behind orange curtain." It's coach's night in ATX. pic.twitter.com/0JeV9zmZYu