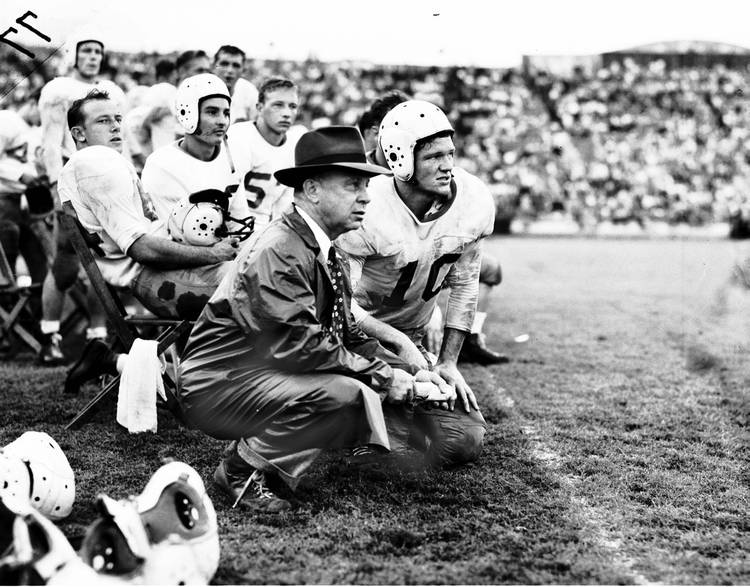 SPECIAL TO CBS SPORTS--FILE--Dana X. Bible, squats on the sideslines as his University of Texas team plays in 1946. The Thanksgiving Day game against the Texa A & M team, concluded his actie careeer of 34 years of coaching. He took the post of director of athletics at the school Dec.1,1947. (AP Photo) ORG XMIT: NY902

After the two worst seasons in Texas football history, the Longhorns needed to be bold in their next hire before the 1937 season.

The athletic department didn’t have a true athletic director during the Clyde Littlefield and Jack Chevigny seasons. There was an athletic council instead.

No coach. No athletic director. Lots of money in Texas. For really the first time in the history of the football program, and probably the athletic department, Texas was about to do a boss move that would help establish a reputation that exists today: That Texas will (and at least try to) hire the best coaches in the nation.

That coach and athletic director was Dana X. Bible.

If you’ve been reading along, you know that Bible had been the coach at Texas A&M about 20 years earlier. He was. But by this time, the 1951 College Football Hall of Famer had moved on to Nebraska.

Bible had 10 conference titles in his career before he even got to Texas. He also coached the one of the most ridiculous teams in the history of college football. The 1919 Texas A&M squad that went undefeated, untied and combined to outscore opponents 275-0. This squad was retroactively named the national champions of college football years later by the Billingsley Report and the National Championship Foundation.

Texas made Bible the highest paid person on campus when they hired him away from Nebraska. At $15,000 a year, he made more than the university president at the time.

This is during the Great Depression, remember.

Born in 1891 in Tennessee, Bible’s father was a college professor at Carson-Newman College, and that’s where Bible went to school. He first football coaching job was as a high school coach in Shelbyville, Tenn. When he was just 21-years-old, he became the head coach at Mississippi College in 1912. Four years later, he left for Texas A&M.

When he arrived at Texas, he needed to pick up the pieces. All the success that Clyde Littlfield, E.J. Stewart and Berry Whitaker had made was forgotten under Chevigny.

As Texassports.com puts it, “He inherited a team that was more depressed than the nation’s economy.”

And it was. Chevigny had struggled to connect with high school coaches in the area, and the bad seasons didn’t make Texas all that attractive at the time.

Good thing Texas had patience, because things were about to get worse. But eventually, Bible would arguably become the most important person in Texas athletics history.

The Next 25: No. 11 Marcus Stripling’s strength is his greatest advantage